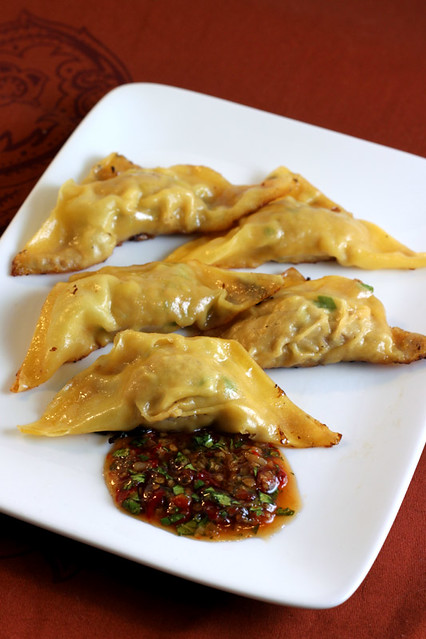 
My boyfriend loves Chinese food, though. It’s probably his favorite kind of cuisine. So when I was flipping though my cookbook one day and he saw this recipe, he said “You should make those!” and I reluctantly agreed because I’m an awesome girlfriend like that (…and I’m so humble about it 😉 ). But another reason I was weary about making this recipe, besides not liking Chinese food in general, and dumplings specifically, was that this is a recipe from my Weight Watchers cookbook

. And while I love this cookbook and have been happy with almost all of the recipes in it, I don’t exactly equate Chinese food with healthy cooking. But maybe that’s just because the only Chinese food I like is the fried stuff? Anyway, I was very glad to have my all my assumptions proven wrong. Seriously, even if you’re like me and you don’t really like Chinese food, give these a try because they are like little pockets of yum.

My boyfriend, who eats these all the time at Chinese restaurants, says they taste quite authentic, too. I liked that they weren’t overly greasy, which is probably my main problem with Chinese food. It’s the same reason I take all the cheese off of pizza before I eat it. It’s not that I don’t like the taste, but all that grease just makes my stomach hurt. At the same time, neither of us felt like this was a low fat version of pot stickers. It has the necessary amount of oil for the recipe to work, no more, no less. If I served them to you without telling you it was a weight watchers recipes, you’d never assume these were relatively healthy. They actually look a lot greasier than they are. That oily sheen in the photos is more from being cooked in chicken broth, than in oil.

Don’t be scared by the amount of ingredients. If you cook regularly, especially if you try to cook ethnic foods, you probably have most of the ingredients in your pantry. The only thing that was an issue for me to get was the wonton skins. Look for them in the freezer section of your grocery store, but if you can’t find them (I couldn’t), you can get them from an Asian grocery (same with the rice-wine vinegar, although my supermarket had that).

We had these with some fried rice, though I’m sure they’d be great with stir fry or anything like that. They’d make good appetizers for a dinner party. My boyfriend was snacking on the leftovers for days, even eating them cold, straight from the fridge because he liked them so much.

You may want to try to find another recipe to serve them with that uses Napa cabbage, as a head of this cabbage is very large and you only need half a cup for this recipe. I wound up having to throw the rest away since I didn’t know what else to use it in. I’m on the lookout for another recipe with Napa cabbage if you have suggestions! 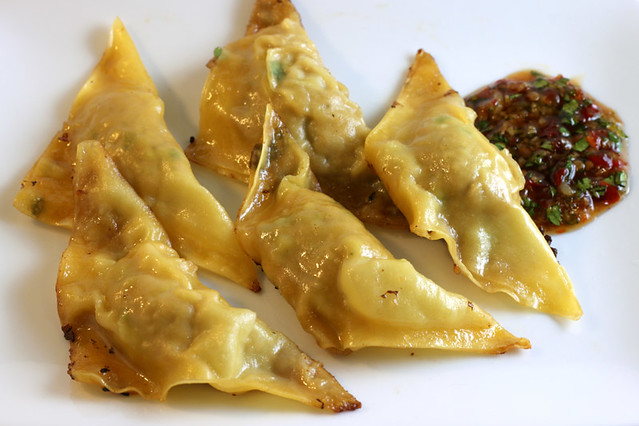