I have an excuse for not posting in a while: finding a good recipe is hard! This is my third attempt at a cake in as many weeks and I finally have a winner to show you guys. I could have posted a couple weeks ago when I made that spongecake that turned out to be the blandest of bland, but I just couldn’t get myself to be excited about it. (It was so bland, it wasn’t even worth the calories to me and I wound up throwing most of it away. I’ve never thrown a cake away before!) So then I found a chocolate angel food cake recipe that sounded like it would be anything but bland, but I failed. Oh, I failed hard. The cake tasted ok, but I believe the word “brick” was used by my boyfriend when he saw said cake. As in “That’s supposed be an angel food cake? It looks like a brick.” So then I went online searching for why my cake turned out to be a brick instead of a cake and I found a similar angel food cake recipe that sounded better and from that I, finally, finally, made a successful cake. Not just successful in that it doesn’t look like a brick, but successful in that it’s one of the best cakes I’ve ever had in my entire life. 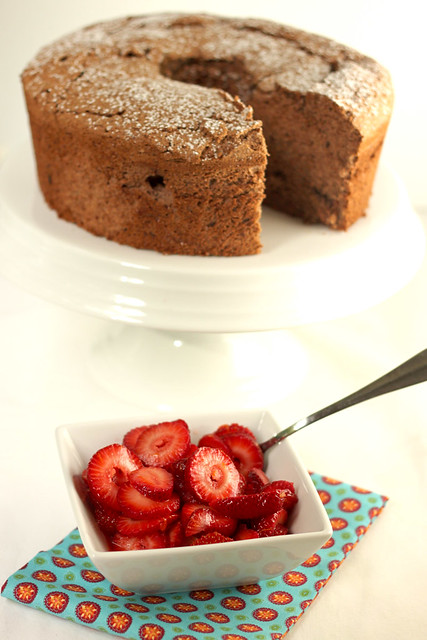 And I say that a person who has never really liked angel food cake before. I like cakes that are rich, I like frosting! Even though I was interested in trying this recipe, it was mainly in a “I’m trying to watch what I eat but I still want dessert” kind of way. I didn’t really expect it to rival those rich, frosting-laden cakes that I love so much. If this was a normal cake, it would be too rich. You’d eat half and then push it away because you just couldn’t eat anymore, even though it was delicious. But since this cake is so moist and light and fluffy it perfectly balances out the rich chocolate flavor. Add macerated strawberries, sweetened, but a little tart due to the added orange juice and zest and you get a bite of perfection.

I’ll tell you though, the chocolate you use is key. It’s really really really important. I know this because the first chocolate angel food cake I made, the flat one, it only had cocoa and while it tasted ok, it didn’t have the richness that this recipe has. This recipe has cocoa plus grated chocolate and the grated chocolate makes all the difference. I wound up using 60% cacao bittersweet chocolate because that’s what I had in my pantry but I highly recommend using that because I think it adds more richness than semi-sweet chocolate would.

If this is your first angel food cake, it’s not difficult, but you just have to be very gentle and make sure you are using the correct folding technique (hint: it’s completely different from stirring). What ultimately killed my first attempt was that I folded too much and too hard and lost all the air from the whipped egg whites. It’s okay if there’s still some white streaks in there (I put a tip for how I dealt with this in the directions). I found this how-to video on folding to be incredibly helpful. Also, here’s a good guide about whipping egg whites if the whole soft peaks/firm peaks thing confuses you.

This cake just makes me happy. Since it’s angel food, I don’t have to feel guilty about eating it, but it also doesn’t come with that “this isn’t as good as the real thing” feeling that you get from eating most low-fat desserts. It’s perfect.

Also, if you’re looking for something to do with your egg yolks (12 is a LOT to waste!), I highly recommend this pineapple curd. I made it as the filling for that bland spongecake and it was the only redeeming thing about it. I wound up just licking off the curd and discarding the cake. It was delicious and really simple to make and you can use it for a variety of things (or you can just stand in front your refrigerator and lick it off your fingers). 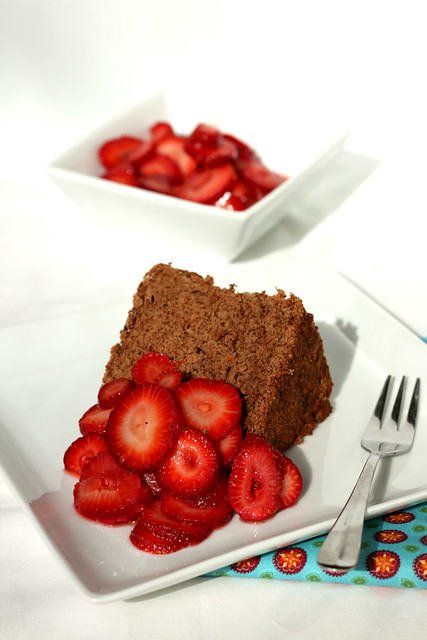 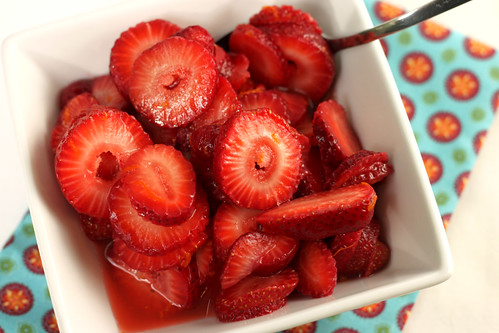