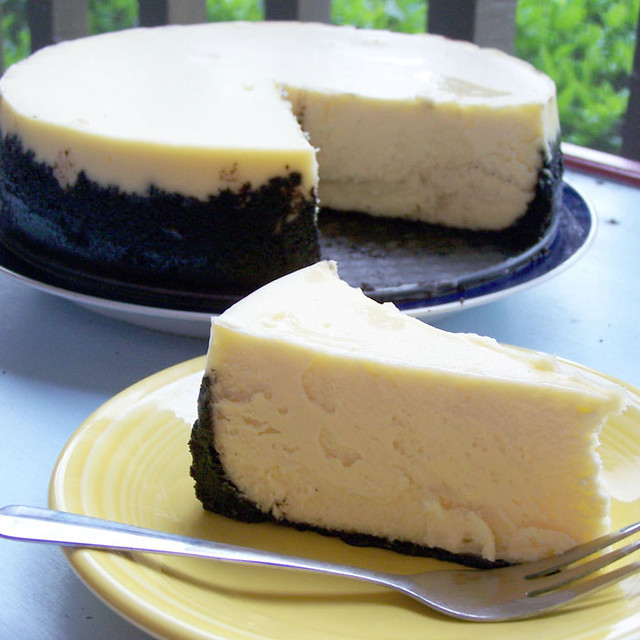 It was my boyfriend’s birthday last weekend and I wanted to make him something special despite the fact that he didn’t really want to celebrate his birthday. The problem is that he doesn’t like many traditional desserts, most especially cake. I can’t even conceive of disliking cake, but somehow he does. Thankfully, though, he does love cheesecake (which he vehemently insists is not really a cake, so much does the taint of the word “cake” bother him). But even having found a dessert he actually likes, he’s almost impossible to entirely please because every single cheesecake I’ve made for him in the past, though always praised as “good” comes with the disclaimer of “but not as good as the New York cheesecake I had that one time”. AAARRRRRRGGGGGGG! So I have made it my mission to find and make a real New York-style cheesecake and this time I think I found it. I actually got an “I really like this” out of him, no disclaimers!

This is sort of a mish-mash of a recipe. I cobbled together a recipe from several cheesecake recipes over on allrecipes.com (it’s mostly based on this recipe, though), but I didn’t want a boring graham cracker crust, so I modified a standard crust recipe and used ground up Oreo cookies instead (Brandon loves Oreos!). Also, I followed the instructions of some of the commenters on the recipes, so in the end, the final recipe doesn’t resemble the original one that much. But it’s delicious and from what I can tell it’s true New York-style cheesecake and the best thing of all is that it’s the only cheesecake I’ve ever made that didn’t crack down the middle. In fact, when it came out of the oven I was a little worried because it doesn’t look like any cheesecake I’ve ever made. It kind of looked undercooked actually*, but no, it’s the smoothest, creamiest cheesecake I’ve ever had. This is definitely my cheesecake recipe for life.


*UPDATE – 12/4/08: After making this recipe again, I tried a slightly different way to cook this that solves the problem of it looking undercooked. It also makes it more like a real New York-style cheesecake by browning the top and sides just a bit.

If you like this New York-style cheesecake recipe, check out these variations:

**Your cream cheese should be very soft to get the smoothest batter with the least amount of mixing time. I usually leave my cream cheese sitting on the counter all day or even overnight.