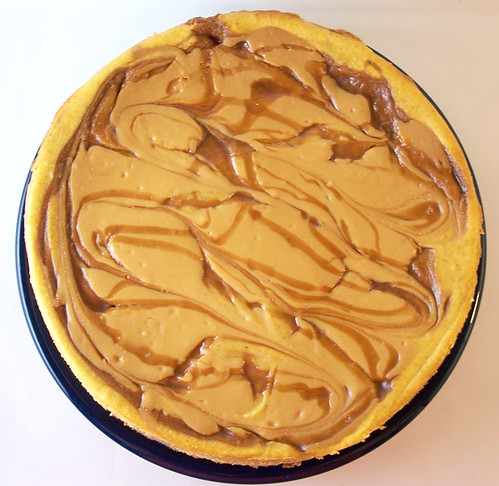 But this year, after discovering my love for all things pumpkin flavored, I decided I wanted to attempt a pumpkin cheesecake. But of course, I didn’t want to use any other recipes because Brandon and I both think that my Cheesecake Supreme recipe is the best cheesecake we’ve ever had (other commenters agree, I’ve had a bunch of people come back after they made it and tell me how much they loved it). I also really like the concept of the black and white chocolate version and wanted to do something like that instead of having just a plain pumpkin cheesecake. In the end, I took my black and white chocolate cheesecake recipe and substituted pumpkin and caramel for the white and dark chocolates, then I topped the whole thing with extra caramel.


It was a gamble, but it totally paid off. In fact, I think this cheesecake is better than the other version. Brandon agreed. If you can believe it, he wasn’t as big a fan of the chocolate version since he’s not a chocoholic like me, but he loved this pumpkin version even though he doesn’t really like anything else with pumpkin in it. He especially loved that this uses gingersnaps instead of graham crackers. (He ate ALL the crust. He NEVER eats all the crust.) I’ve seen other pumpkin cheesecake recipes that use gingersnaps and I thought that was a great idea. After eating it, I think the gingersnaps really enhance the pumpkin and caramel flavors. Plus, it’s given me all sorts of ideas to use gingersnaps in other desserts, too. 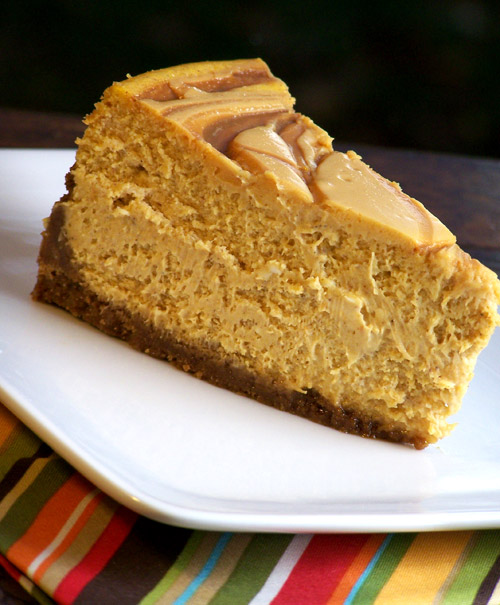 I was hoping this would have the same kind of look of the chocolate version, where you can see the globs of dark chocolate throughout, but caramel and pumpkin are pretty much the same color, so it doesn’t have that effect. You can kind of see it if you look at the top of the cheesecake, the caramel batter turned a slightly darker color and you can see the cinnamon mixed in with the lighter pumpkin batter around the edge. But that effect is only on the top, the inside of the cheesecake looks uniform. But that’s ok, it may not be as pretty as the other version but the taste of the pumpkin and caramel together is wonderful. I think this cheesecake is my new new Thanksgiving tradition. Maybe I’ll save the black and white chocolate version of Christmas…

UPDATE: If you like this cheesecake recipe also check out these variations: 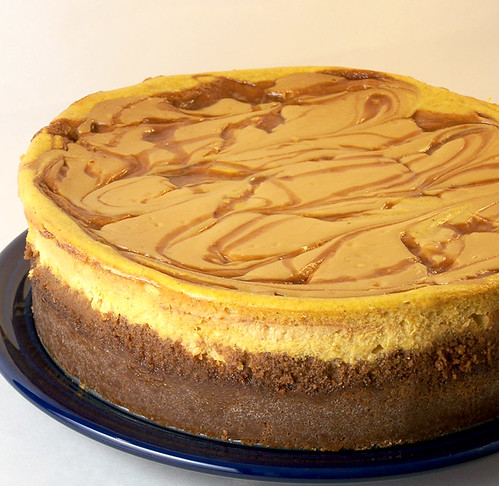