Just like Spaghetti-os and Oatmeal Cream Pies, Pop Tarts are one of those things I loved when I was kid but have tried to stay away from as an adult. But since I had so much fun learning to make those other favorites at home, I figured it was time I finally attempted homemade Pop Tarts. With the other recipes, I was trying to make a homemade version that was close to the taste and texture of the originals. This time I wanted to make a healthier Pop Tart. But one that still, you know, tastes good. And while this recipe isn’t especially low fat (by my calculations it’s about the same as the store-bought version), after some trial and error I feel like I came up with a satisfying compromise.

A Pop Tart is pretty much just pie crust with some type of filling, so the pastry dough is the most important part. I tried out several different “healthy” pie crust recipes first. Lesson learned: pie crust without butter SUCKS. It just does. But thanks to a tip from a reader (Thanks, Shel!), I figured out you can substitute healthier coconut oil for shortening. So while this dough does have butter, there’s no gross shortening and it’s still flaky and moist. Yay! 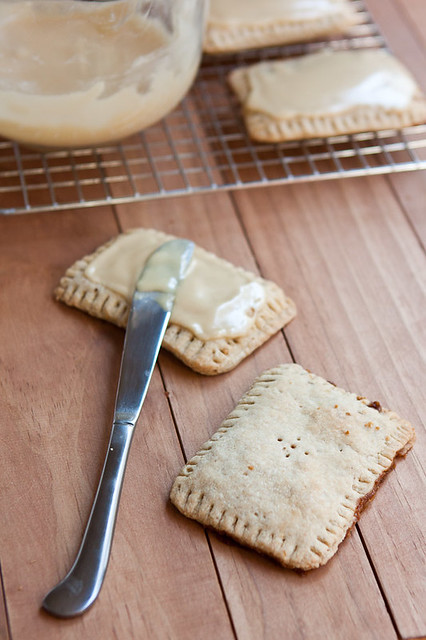 To add more whole grain to the tarts I substituted some of the white flour for oat flour. I just really like the flavor that oat flour adds to baked goods and I think it works well with the maple-cinnamon filling. But don’t worry, you don’t need to go out and buy special flour, you can make your own oat flour just by grinding normal oats in a blender or food processor.

My favorite flavor of pop tarts when I was young was the brown sugar-cinnamon. Hands down. None of that fruity stuff, I wanted straight sugar! But I’ve grown up (a little bit) and while I’m still a sugar fiend, I’ve been trying to cut down on the processed sugar so I used maple syrup instead. The only part of the recipe where I broke my processed sugar rule was with the icing on top. My 8-year-old self would not let me pass up icing these! But the icing has more maple syrup in it to give the tarts lots of maple-y flavor. 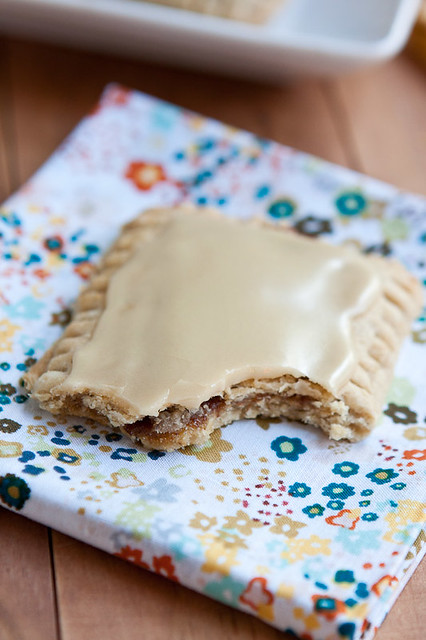 Instead of using brown sugar for the filling, I used maple sugar. Maple sugar isn’t a very common ingredient in recipes, but dammit, it should be! It’s amazing! Imagine a concentrated, crystallized form of maple syrup. It’s a little courser than granulated sugar, but it tastes delicious and you can substitute it for sugar in any recipe. The downside is that it’s tough to find and a bit expensive, I had to order mine from Amazon

. If you can’t get maple sugar, you can use brown sugar instead, but if you love maple syrup this stuff is worth the effort to find it! When the sugar is baked, it melts and makes a warm, gooey maple-cinnamon center for these tarts.

These homemade Pop Tarts are very simple and flexible to make. Feel free to use all white flour or substitute whole wheat (or another whole grain flour) instead of oat flour. The pastry dough only takes about 10 minutes to put together (and you can do most of it in a food processor); after it chills for a short time, roll it out and cut into rectangles. The possibilities for fillings are almost endless. Fill it with cinnamon-sugar, fruit preserves, chocolate, Nutella, or whatever you like!

*You can make your own oat flour by putting rolled oats (NOT quick oats) in a blender or food processor and processing until fine. Sift the flour to make sure there aren’t any bigger pieces of oat left in there.

To make ahead of time: shape the tarts and freeze them individually. Pull out the tarts as needed and bake.