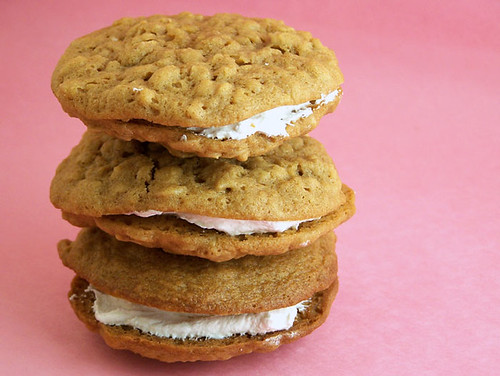 I don’t usually post recipes I’ve found on other food blogs (and actually the original recipe is from Recipe Zaar, you see my Delicious account for recipes I like from other food bloggers), but I just had to post this one because these are so awesome. Have you ever eaten Little Debbie oatmeal cream pies? These are just like them…in fact, they are better. I used to love these when I was kid, but haven’t allowed myself to eat one in years. While these are by no means good for you, you at least know what all the ingredients are and you don’t have to worry about all the chemicals and whatever else crap is in the store bought version. I made a batch for my boyfriend to bring to his office and they were a giant hit with his coworkers who all agreed they liked them better than the originals.


I don’t have much else to add about these other than “OMG-these-are-so-good-you-have-to-make-them-right-now”, but these are the first cookies I made with my silpat baking mat

so I did want to talk about that a bit because I thought it had a big effect on these cookies.

and how it was the best thing ever. For those not in the know, it’s a silicone mat that you can place in your cookie sheet and nothing will stick to it (it’s also supposed to be a good surface for kneading bread). I’ve been using parchment up until now and have been happy with the results, but the set-up is kind of a pain. (Having to trim it to fit the pan, getting it to lay flat, etc. Once I shoved my cookie sheet in the oven too hard and the parchment slid off and cookie dough splattered all over the hot oven. That sucked. ) So I finally broke down and bought a silpat last week. I will reserve total judgment until I’ve made more than one type of cookie on it, but my first feelings about it are mixed. When I baked these cookies I switched back and forth between a cookie sheet with silpat and one with parchment and I have to say, the ones on the parchment were significantly better. In fact, this showed me exactly why people love silpat so much, but it also showed me that maybe not all types of cookies should be baked on silpat. You can see the difference between the two cookies: 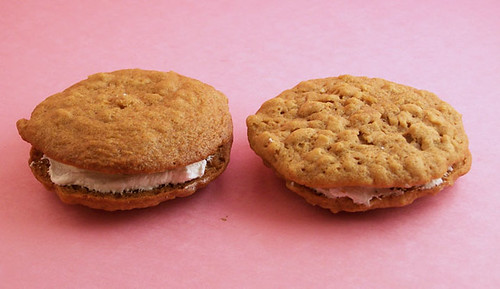 Silpat on the left, parchment on the right. Which one looks more like the original Little Debbie snacks? Definitely the one on the right. The point of those cookies is that they are really soft and chewy and textured. The silpat baked cookies were much thicker and weren’t nearly as soft and it somehow wound up taking out all the texture of the oatmeal (which is kind of magical in and of itself, but not so great if that’s not the effect you’re going for). But let’s say I was making chocolate chip cookies instead of oatmeal, I would absolutely prefer thicker, firmer, smoother cookies. So it’s not that I dislike the silpat, but I think it’s important to think about the texture you want your cookies to be and how that’s going to affect them. I am definitely going to be making my favorite chocolate chip cookies soon because I do think silpat will make those already fantastic cookies even better.

But in this case, I won’t be baking these oatmeal cookies (or any probably) on silpat anymore. To be fair, I felt the ones on the parchment spread out too much and were a bit thin, so I would recommend increasing the flour by about 1/4 cup if you’re not baking on silpat. I did a second batch with the added flour and I thought that helped significantly with the spreading problem without making them less soft or chewy. 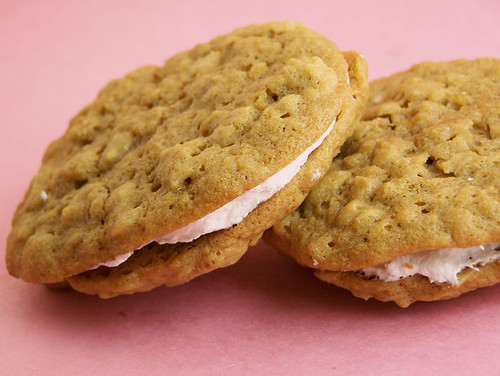 adapted from Food.com via The Craving Chronicles

*UPDATE 9/17/2010: After some comments and additional tests I’ve determined that you should use quick oats instead of rolled. You definitely get much a thicker and fluffier cookie with them.

For more consistently sized cookies, I recommend using a cookie scoop. Mine holds about 1.5 tablespoons which is the perfect size for this recipe.