It was called Tuna a la King and I didn’t remember it having tuna, but everything else fit so that had to be it. But when I went to the grocery store I could not find those damn adorable little puff pastry shells. I searched in grocery stores all over Jacksonville and no one had them. I thought maybe they didn’t even exist anymore? I searched around and found other variations of the recipe, but most had mushrooms and pimentos, and I’m not a fan of either of those things. (Probably why my mom made this recipe in the first place since broccoli was one of the few vegetables I would eat when I was young.) Most didn’t have the pastry, either, they were just served over rice or noodles or nothing at all. I guess I could have done that since I had all the rest of the ingredients of the recipe, but it wouldn’t have been my mom’s recipe without those damn adorable little puff pastry shells. So I put the recipe away thinking maybe it was just not meant to be, though I couldn’t help scanning the frozen food section every time I went to a new grocery store.

Cut to a few months ago when we moved back to Orlando and miracle of miracles, the D.A.L.P.P.S were just sitting there in the freezer hanging with the phyllo dough and frozen rolls. It took all my strength not to start dancing around in the frozen food aisle (ok, there was a little dancing, hopefully no one saw me because it probably looked like some kind of a spasm). They were the exact D.A.L.P.P.S that my mom used. I could never forget that hexagonal shape!

I went home and made the recipe that night and it was good, the D.A.L.P.P.S definitely make it, but it wasn’t quite what I remembered. I made it again a few weeks later and it was closer (I had added more seasoning), but still not the same. It finally occurred to me it was the tuna that was making it taste different. I didn’t remember it having tuna because it hadn’t had tuna, my mom had used chicken instead. I went back to the grocery store and found canned chicken in the same aisle as the tuna and when I made it again it was perfect. It tasted exactly like I remembered and Brandon and I both agreed we liked it better with chicken than tuna (though like I said, the tuna version wasn’t bad, just a little different). 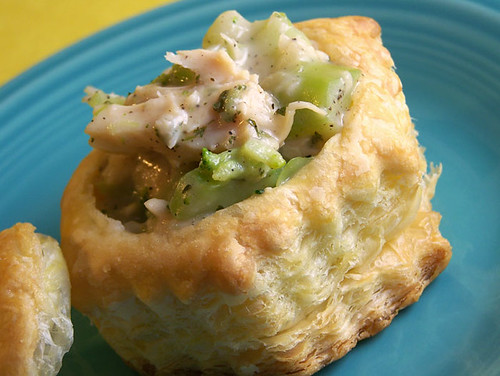 So now it’s pretty much all I can do to not make this every single day of the week. It’s crazy easy to make, you don’t have to remember to defrost anything (always a huge problem for me) and takes less than 30 minutes from start to finish. The fact that puff pastries are not the most healthy thing in the world is the only reason I actually do limit this dish to every few weeks. But the chicken part isn’t bad for you at all and it has broccoli so you get your vegetables. Eat this with some fruit and you got all your food groups covered.

I still can’t figure out why the Jacksonville Publix’s didn’t have the D.A.L.P.P.S, but the ones here do, so I hope Jacksonville is just a fluke and they aren’t hard to find. My mom never seemed to have an issue finding them even when we lived in a tiny town on the top of a mountain in Tennessee. In my search for puff pastries, I did find flat puff pastry dough (with the biscuits and cookie dough) that you can cut into any shape you want (I used it for my Chicken Pot Pie Soup recipe), so that’s an option, it just won’t look as cute as the D.A.L.P.P.S. 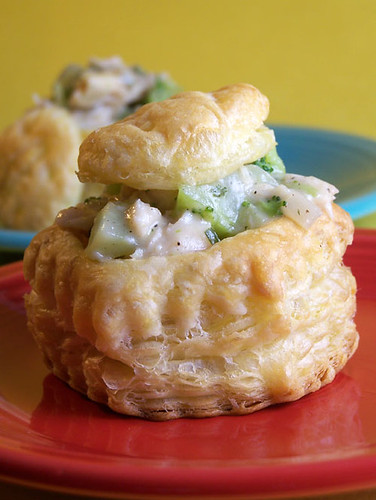