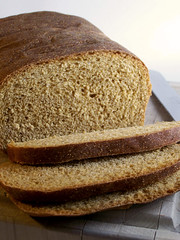 I would definitely call myself a bread person. The only reason I like pizza is because of the crust, most of the time I even take all the cheese off before I eat it (I HATE greasy cheese). My favorite restaurants are the ones that give you bread and if it’s a choice between finishing that bread and finishing my entree, well, I can always get a doggy bag. I gave a waiter a HUGE tip a few weeks ago just because he gave me a whole new loaf of bread to bring home with my leftovers.

Despite my love of bread, I’ve never done any bread baking. I’ve always loved baking cakes and cookies, but yeast bread just seemed so complicated. Anyone can make a cake, but to me, bread always seemed like something only trained professionals could do: the kneading and rising and all that. And the yeast! That word is just scary. Plus I take almost all of my cooking cues from my mother and I can’t remember her ever making bread. Quick bread like banana bread, yeah, but never any kind of yeast bread. I don’t even remember either of my grandmothers making fresh bread. We were definitely a frozen roll kind of family.

But I decided to take the plunge last Thanksgiving and I made fresh rolls and discovered that bread baking really isn’t that hard. I made some more rolls at Christmas. Then there was the King Cake. A few months ago I attempted a sour dough loaf, which was pretty good (though I never posted it here because I thought I could do better) and a few weeks ago I had a lot of fun making Smitten Kitchen’s Black Bread. Had Nicole started this challenge last year, there’s no way I would have attempted it, but I felt I had learned enough basic knowledge of bread baking to do it. And I definitely like the challenge aspect of it. We’re not competing with each other or anything like that, but how great will it feel to say I made every recipe in the book? And how much will I have learned by the time I get through the whole book?

Just from reading the first few chapters, I feel like I’ve learned a ton already. I highly recommend it for bread baking beginners like me. Peter Reinhart goes through the entire process of bread baking from beginning to end in amazing detail and he explains the science behind what is happening in each stage and why kneading and rising and all that other scary sounding stuff is necessary to create amazing bread. Plus there’s tons of great tips and tricks and a helpful list of tools (I just bought a baking stone and kitchen scale). 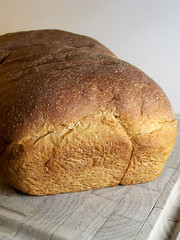 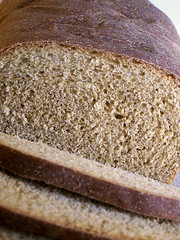 The first recipe in the book is Anadama Bread which is a really delicious sandwich bread. It takes two days, but the first day was just mixing some cornmeal with water and letting it sit overnight, so it’s only one day of real work. Then you mix that, which is called a sponge, with flour and molasses and other stuff. It’s all about the molasses. That gives the bread a nice color and a slightly sweet taste. It’s so good. Especially toasted and slathered with butter or jam. It’s my new favorite bread.

I’m letting my wonderful kitchenaid mixer do much of the mixing work, but I’m doing all the kneading by hand. I wound up having to knead this dough for 15 minutes before I passed the “windowpane test” (where you can stretch out the dough enough to create a thin, almost see-through surface) and if you’ve ever kneaded dough for that long you know that can work up a sweat. I honestly never understood why “no knead bread” was so popular until that day.

If you are interested in this book and want to make this bread, the first few chapters up to this recipe are available for preview on Google Book Search (though a bunch of the pages are obscured, maybe on purpose?). Here’s the Anadama Bread Recipe. If the first (and probably easiest) recipe in the book is this good, imagine how good the rest must be? 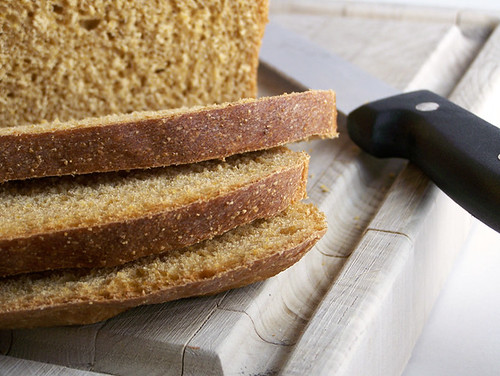 So. The goal of the group is to make one recipe per week (and even at that pace we won’t be done until next Spring!), but we’re all free to work at whatever pace we want. The main goal is just to finish the book, no matter how long it takes. I’m going to try to keep up with the one a week as best I can, though. Nicole has asked that we not post the recipes on our blogs, which I understand because hundreds of people posting all the recipes in the book is pretty unfair to the writer. I’m not sure I’ll be posting about every single bread I make here, but I will definitely be updating regularly with my progress and what I’m learning, what I’m struggling with, etc.

If this challenge sounds like fun to you, too, buy the book

and bake along with us! While Nicole isn’t adding new members to our group (it’s already past 200 and she doesn’t want it to get unmanageable), she’s inviting anyone who wants to to participate with us. There’s a flickr group and a facebook group and a bunch of us are on twitter, so there’s lots of ways to participate and to see what everyone else is doing.

Next up is Artos bread, which looks pretty similar to my King Cake recipe so it shouldn’t be too hard. I’m going to be trying my hand at dough shaping again, which if you look at my lopsided King Cake, you’ll see is not my forte. Practice makes perfect, right?