Anyway, I found this strawberry tart recipe in my favorite cookbook and decided to go for it. I’m glad I did because this was damn good but it’s kind of involved. It’s definitely worth the effort to make, but like pies and cheesecake, I think this is a “special occasions” kind of dessert. It’s not difficult, per se, but there’s a lot of steps because you have to make all the parts (the crust, the pastry cream, the glaze) and then assemble them all together. You definitely need a couple of free hours to make this (there’s a bunch of waiting time while things cool), but it would also be pretty easy to make the parts earlier in the day and then assemble them right before you serve because the assembling is the easy part. 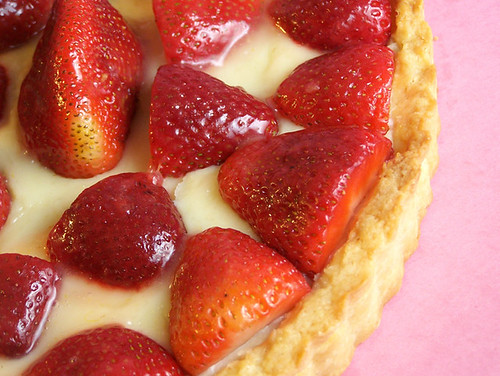 A good crust is really important to me because I think a bad crust can ruin a dessert no matter how good the center is and this crust is delicious; it’s really buttery and a little sweet, almost like shortbread. I’ll tell you, though, it was a PAIN to roll out. Since there is so much butter, it got too soft and sticky within minutes, no matter how long I had frozen it beforehand. But I finally figured out a way that worked and I’ve outlined it in the instructions with special notes.

The pastry cream wasn’t hard to make, it’s just one of those things that you have to stand over and stir the whole time, but I think it only took about 15 minutes, so it’s not a big deal. You definitely have to let it cool completely first; I thought it tasted much better after it was chilled, actually. It’s rich and smooth and creamy without being too heavy. It compliments the crust perfectly. 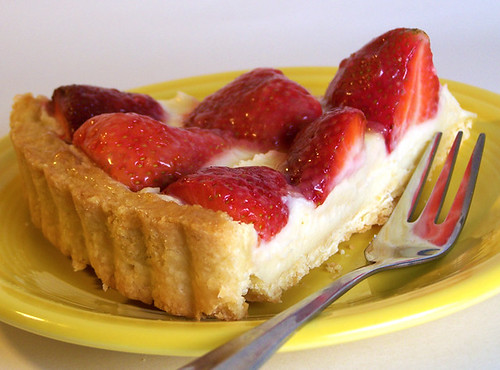 The glaze is totally optional. The cookbook suggested a different glaze, but I really wanted lemon so I looked around and found a different recipe for that. I kind of screwed up and put WAY too much on there, though. I pretty much poured it on there (and I had let it cool too much beforehand as well, another no-no), when I should have just lightly brushed the strawberries. After a few hours it turned sort of gloopy. Brandon said he wasn’t a fan of that, but I didn’t really notice it. Honestly, I’m not even sure this needs a glaze, it would be totally fine without. I thought my strawberries were a little lacking in flavor (that’s what I get for buying strawberries from Walmart), which is why I wanted the glaze on there in the first place. I’ve included the lemon sauce recipe (just use it sparingly!) as well as the glaze recipe from the cookbook (which he also says is optional), so you can try one or the other of them out or just skip that step altogether. 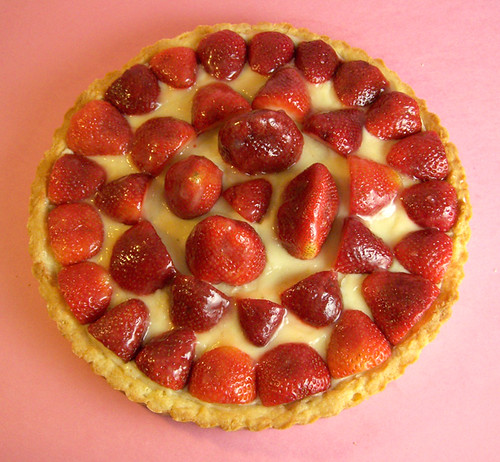 adapted from How to Cook Everything by Mark Bittman

Sweet Tart Crust
This is for an 8-10 in. tart pan. Mine is 11 in., so I just doubled this recipe and froze the leftover dough.

I had A LOT of trouble with this dough because of how buttery it is, but it tastes damn good, so it’s worth the effort. I’ll outline what worked for me when rolling this out. I’ve included the food processor directions if you have one of those. It sounds a hell of a lot simpler with a FP, but alas, I don’t have this modern marvel, so I had to do it the old fashioned way.

You can start this while the crust is baking.

Finally, Make the Tart (This is the easy part!)

I’m including the lemon sauce I made as well the glaze suggested in the cookbook. You can use either one or choose not to glaze at all.