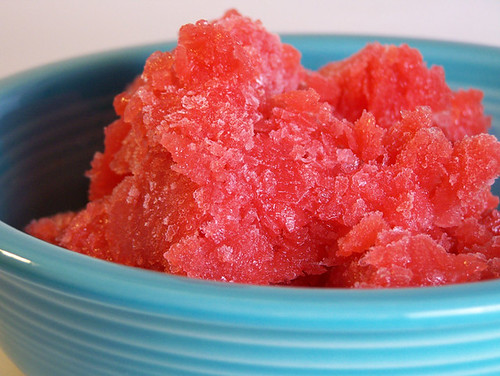 
But my obsessive personality has a really big effect on how I eat. It’s probably one of the reasons I’ve always been such a picky eater. When I decide I don’t like something, then that’s it, I don’t eat it again. Ever. I haven’t eaten a carrot in 20 years because once in elementary school I threw up in the cafeteria after eating them. Recently I decided I should give it another try, but no, it was just as bad as I remember. (I used to tell my friends that I don’t like carrots because they taste like horses, which is nonsensical, I know, but I still stand by this. If I ever ate horse (which I haven’t) I imagine it would give me the same vomit-inducing taste in my mouth. Plus whenever I think of horses I always think of carrots, too. Because they eat them I guess? I don’t know, my mind is strange.)

The opposite is also true, though. If there’s something I really love, then I want to eat it over and over again. I want to eat it every day. I want to eat it forever. Except it hardly ever works out that way because of another aspect of my personality: I get bored with repetitive things. So combining my OCD with this, I tend to be the kind of person who gets crazy obsessed with something for a certain period of time until I find something new to be obsessed with and completely forget about the last thing I was obsessed with. That’s how I am with food and the whole thing is very cyclical, so even if I give up on something one year, I’ll wind up “discovering” it again a year or two later and being just as obsessed with it until I get tired of it again. 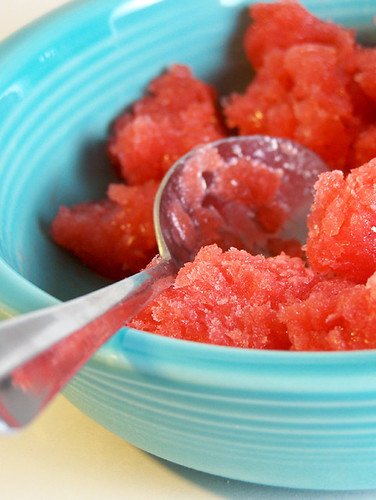 So I say all this to explain why I love this granita so much. The past few months I’ve been on a grapefruit kick, which I tend to get on at least once a year. I’ve been eating half or even a whole grapefruit almost every single day since about March or April, so as you can imagine, I’m kinda over grapefruit by now. But I still had a few remaining grapefruits sitting in my fridge that I had no desire to eat. What the heck do you do with grapefruit? Meanwhile, my new food obsession is strawberries, so when I was flipping though my cookbooks and saw this recipe with grapefruit juice I knew I had to make it. The original recipe actually has raspberries, but I figured strawberries would work just as well. It was the absolute perfect dish to transition from grapefruits to strawberries and my remaining grapefruits wouldn’t go to waste. 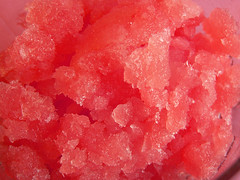 Have you ever had a snow cone? That’s basically what this is, except you’re using fresh fruit juice instead of sugary syrup so it’s much better for you. It’s really the perfect summer dessert and you can probably substitute any kind of berry or citrus fruit that you want, but I thought the grapefruit and strawberries tasted perfect together. It’s sweet and tart all at the same time and you don’t have to feel guilty about eating it! Plus it’s crazy simple to make, just mix it up and freeze it. The hardest part is waiting the 6 hours it takes to fully freeze. 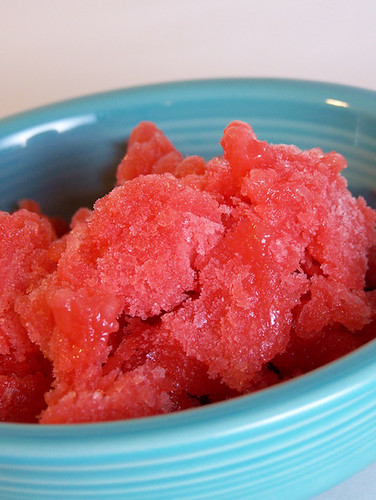 Notes:
Superfine sugar (AKA baker’s sugar or castor sugar) is just regular sugar that has been ground up more finely, so if you don’t have this on hand (I didn’t), just take regular sugar and put it in the blender until it looks lighter and finer, about 30 secs to a minute. I recommend you do this before anything else because you need to do it in a completely dry blender.

The amount of sugar you use in this recipe depends on how sweet you want it to be. If you are using store bought grapefruit juice as opposed to fresh, that will probably have sugar added already so you won’t need as much. I used about 1 cup of sugar with my fresh squeezed (and tart) grapefruits. I’d just add the sugar about 1/4 – 1/2 cup at a time to the juice mixture until it’s sweet enough for you.

If it gets too hard (like from sitting in the freezer overnight), just set it out and let it melt for a bit, then put it back in the freezer and fork-stir regularly until you are ready to serve it again.