The second week bread was Artos or Greek Celebration bread. I really didn’t have any trouble at all with this bread because it was really similar to my King Cake except that Artos has a lot more spices: cinnamon, nutmeg, allspice and cloves. The only trouble I had was the shaping, of course. I can tell it’s going to take a lot of practice to get good at shaping things because I’m just not good at that at all. The version of artos I did was called Christopsomos (though I made it plain, it’s technically supposed to have nuts and dried fruit in it), which is shaped into a boule (an oval, the only shape beside a loaf that I can do without much trouble), but then you roll out two strips of dough and lay them on top of the boule in a cross and then you split the ends and roll them up into curls. Why did I even attempt this?! I’ll fully admit to being an underachiever, but that doesn’t seem to apply to baking. I could have just shaped it into a boule and been done, but no I had to go overboard. The main issue was the curly parts at the end. I guess I didn’t stick them back into the dough well enough, so some of them unrolled while they were baking and well—I’m just gonna say it—they looked like little penises. Sigh. My artos was NSFW. You can sort of see it on the left side in this picture, otherwise I tried to take pictures of the bread’s “good side”. 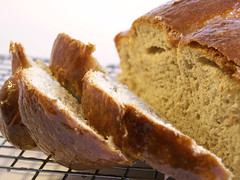 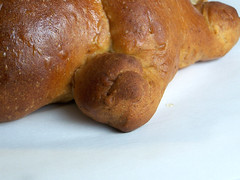 Oh, well, at least it tasted good. It was spicy, but not overpowering. I put on a sweet glaze, which I thought was a bit too much at first, it was way too thick and sticky, but the next day the bread had absorbed most of glaze; it still had a nice satiny sheen to it, but it wasn’t sticky anymore. I think this would be a great bread to give to friends during the holidays, but next time I’m just going to be shaping it into a boule. 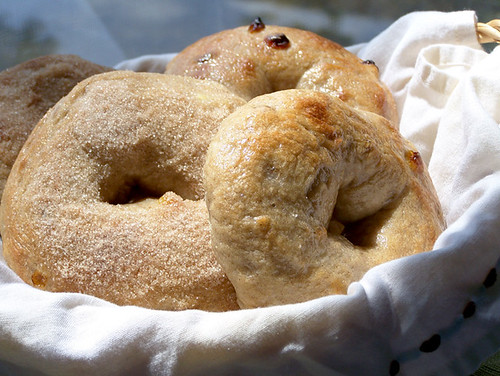 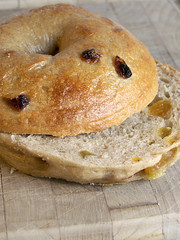 Next was bagels. Now, if you had told me a year ago that I would be making bagels from scratch, I wouldn’t have believed you for a second. I know, logically, that people do make bagels, but that just seemed like such an esoteric thing to do, that I couldn’t even imagine it. So what really surprised me was how freaking easy it is to make bagels. I still can’t even believe how easy it is and I’ve already made two batches. It does take two days, but really that’s for the best. You make and shape the dough, then put them in the fridge overnight and the next day you just boil and bake them which takes less than 30 minutes. You can’t beat fresh, warm bagels. 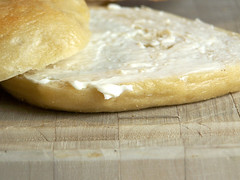 The dough was really stiff, I was actually a bit worried for my mixer, but it made it through. A lot of other BBAer’s seemed to mention having trouble kneading the dough to the point where it passed the windowpane test (so it stretches thin enough that you can almost see through it), but I didn’t have trouble with either of the batches I did. In fact, of all the breads I’ve made so far, I passed the windowpane test the easiest and fastest with the bagel dough. But it was not without trouble at all and I bet you can guess where I had problems…the shaping. There’s two shaping methods: the first is to shape the dough into a ball and punch a whole through the middle, the second is to roll it out into a string and the press the ends together so it makes a circle. The first batch I did I used the punching method because it seemed much easier, but in the punching process I guess I degassed the dough too much which resulted in really flat, sad looking bagels. The second batch I did, I made cinnamon raisin bagels instead of plain and I used the circle method and those turned out much better. They looked like real, actual bagels that you buy at the grocery store!

The only other thing I screwed up on was that you are supposed to add baking soda to the water that you boil the bagels in and I somehow forgot that step in both batches that I did. I have no idea how I missed it two times, but I did. From what I can figure, the baking soda makes the outside of the bagels look more smooth and brown more evenly. Oh well, next time! They still tasted damn good on the inside (even the first sad-looking batch). I especially loved the cinnamon raisin and I know I will be making them a lot. 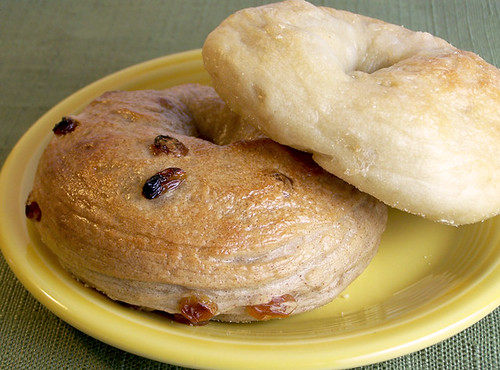 Next up is brioche. I’m not sure I had even heard of this bread before, but it’s like an uber buttery, rich bread. I actually already started this past weekend, but it was kind of a disaster, so that will be a whole new post because I’m going to attempt at least one of the other versions of it later this week to see if I can get a better result.