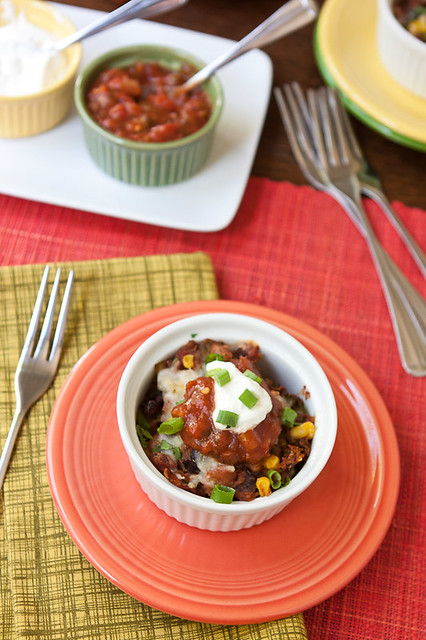 and I was expecting it to be disappointing up front. Not only is it low fat, but it doesn’t even have meat in it. I gave it a chance anyway, mostly because of how easy it was, and I’m happy to say this recipe totally surprised me. 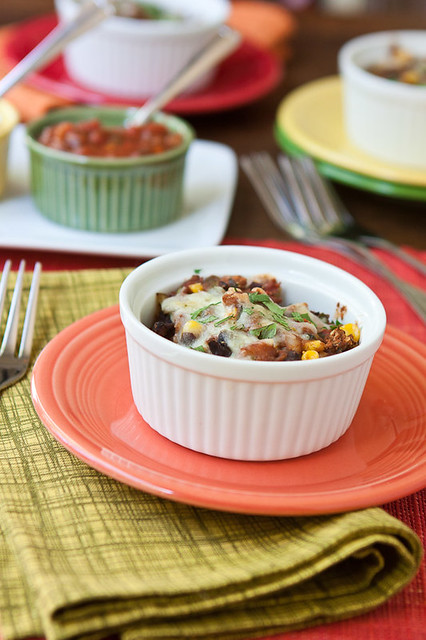 These are called “pies” because there is a layer of polenta at the bottom that forms a soft crust. I’d never had polenta before, but it’s basically just cornmeal and it acts as a nice base for the filling which is a mixture of cooked pinto and black beans, tomatoes and onions. I added corn to the recipe because you really can’t go wrong with more vegetables. (Plus it adds some nice color to the brownish filling.) Everything is topped with spicy pepper Jack cheese and baked until bubbly and melt-y. Basically, it’s comfort food without any of that annoying guilt!

I’ve made this recipe 3 or 4 times now. The last two times were in the span of a few weeks because it’s just so easy to whip up and it seems to taste better and better the more I make it. I know I’ve found a keeper when I make something that doesn’t have meat in it and Brandon doesn’t complain at all. In fact, he likes this dish just as much as I do. I especially know I’ve found a keeper when I’m craving it instead of a chimichanga. I’ll never completely give up going to my favorite Mexican restaurant, but this recipe makes it okay to skip a couple of weeks. 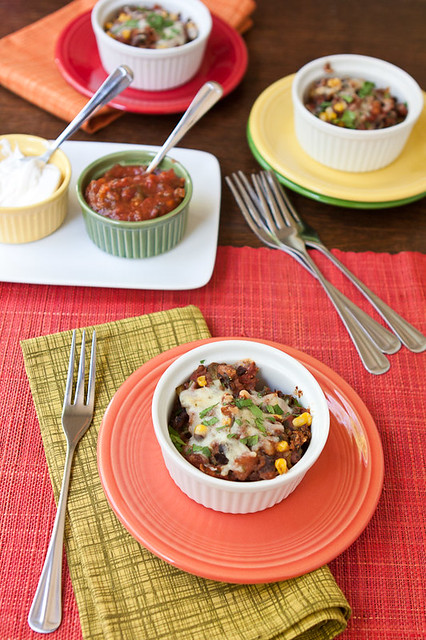 adapted from Everyday Food: Light – The Quickest and Easiest Recipes, All Under 500 Calories

*Spice this up by using fire-roasted tomatoes or tomatoes with green chilies. You can also increase the hot sauce to 1 tsp. or more.

**If you’ve never bought this polenta before, look for it in a refrigerated part of your produce section. In my store it’s with the tempeh, tofu and other vegetarian meat substitutes.

You can make a full size version of this in two deep dish pie plates instead of ramekins. Slice the polenta into 16 thin rounds and line each pie plate with 8 of them. Top with the bean mixture and cheese. Bake as directed.