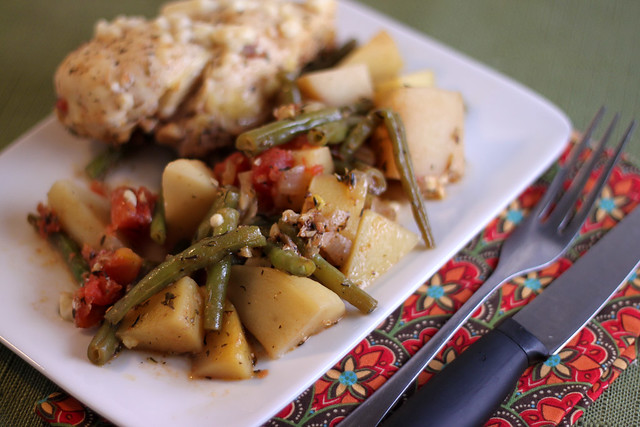 I guess Cooking Light called it a “casserole” because it’s bunch of stuff mixed together in one dish, but I wouldn’t call it casserole. I would say it’s more of a stew, except instead of having the meat chopped up and mixed it with all the vegetables (like a beef stew), the meat sits on top of the vegetable mixture. So it’s sort of like two dishes in one.

And while I thought this dish tasted good, we used to go to an authentic Greek restaurant in Florida and compared to the stuff I got there, I thought this dish could use a bit more seasoning (though this recipe is light and the stuff I ate at the Greek restaurant most definitely wasn’t, so that’s a factor). There’s really only thyme and garlic. I’ll admit I omitted the anchovy paste/olives (because I didn’t have either and don’t particularly like either) so maybe that adds some flavor? But I’m not familiar enough with Greek cooking that I would know of other herbs and/or spices that would work instead/in addition. If anyone has suggestions, I’d love to hear them!

I’m all for easy dinners and this one definitely is. Just saute the vegetables for a bit and add the chicken and finish everything cooking in your oven. If you don’t have a Dutch oven, you could make it in a large oven-proof pot with a lid or a casserole dish covered with foil (cooking time may vary). In the end you get a complete meal with meat, potatoes, vegetables and even some cheese all in one dish with very little effort on your part. 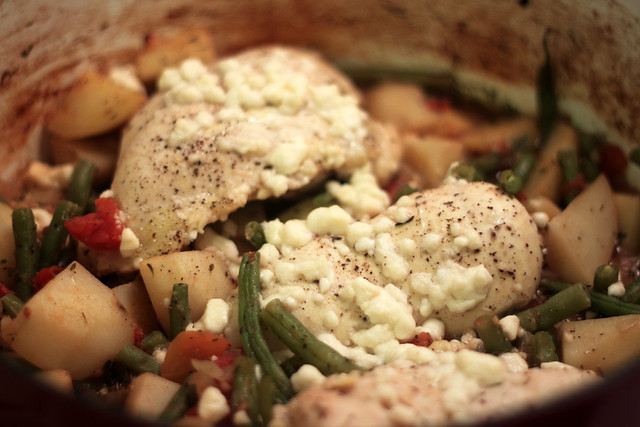 Spoon out a few cups of the potato mixture onto a plate, underneath or beside the chicken.