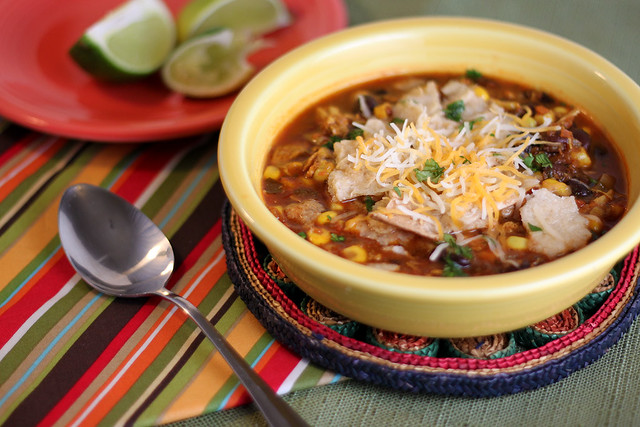 I didn’t use to be a fan of soup. I don’t know if that was one of those things that I turned my nose up at when I was a kid or if my mom just wasn’t a soup person and so she never made it. Regardless, the only soup I ate for years and years and years was Campbell’s chicken noodle or tomato. But when I started cooking for myself, I figured out two important things about soup: It’s generally healthy (even the creamier ones still have vegetables) and it’s really easy to make. Throw some stuff in a pot and you just made soup! I realize that making soup probably isn’t a big deal for some people, but for me, who only ate soup from a can for 20 plus years? Making homemade soup is something I feel proud of, the same way I feel about making homemade bread.

This winter I’ve been craving lots of soup since we finally live in a place that gets cold, so I’ve been expanding my soup repertoire. I usually make it once a week but I’ve been having trouble finding a low-fat soup that I really love. Until now that is. This Chicken Tortilla Soup is hands-down my favorite soup. Possibly ever.


The original recipe I adapted had ground meat and I’m not a big fan of ground turkey or beef, so instead, I used chicken and decided to shred it up like you find in other Mexican dishes. I also made several other changes like adding fresh cilantro (one of my favorite smells) and adjusting the spiciness. I can’t eat super spicy food, and I found this to be perfect: not crazy spicy, but definitely not bland. If you like things really spicy you may want to add a jalapeno or some chilies, but that’s way more than I can handle. I also added in some Tumeric. Why you ask? Well, go read this post of the awesomeness that is tumeric (seriously, I’ll wait) and tell me you don’t want to add it to everything now. Actually, you should really read all the posts on that blog because it’s truly enlightening and informative if you’re trying to eat healthier.

This soup has a lot of ingredients (mostly spices), but it’s still extremely easy to make. This recipe makes a lot of soup, I’m probably being conservative with the number of servings, but I love making a big batch and eating the leftovers for lunch the rest of the week. 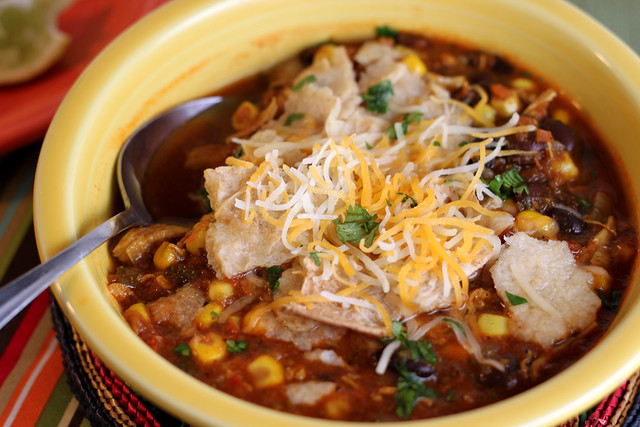 By Back to the Cutting Board. Adapted from One Healthy Mama