For example, I’ve never liked carrots because in elementary school I threw up in the middle of the cafeteria after eating some. Now it turns out, I still don’t really like the taste of raw carrots. But I use carrots in my cooking all the time now because I’ve discovered that if they are in something else, like a soup or salad or pot pie, then I don’t mind them. I used to obsessively pick them out of everything, which was beyond annoying and I can’t believe I bothered. It’s so much easier not being picky!

But the thing that actually spurred this new approach to food was summer fruit. Specifically cherries and peaches. I’ve never liked either. But I realized that I’ve never actually had a fresh cherry before and the only peaches I’d ever eaten were the kind that come in a can of fruit cocktail. I’ve been seeing tons of cherry and peach recipes all summer long, so when I saw cherries and nice looking peaches at the grocery store, I grabbed them on a whim. When I got home and tasted the fruit, I was blown away by the flavor. But it made me feel SO STUPID. I’d been missing out on delicious cherries all my life because I just assumed they tasted like that awful candy or cough syrup. And I thought peaches were as slimy and flavorless as their canned equivalent. After that I knew I had to stop being such a picky eater. How much wonderful food have I missed out on because I wouldn’t even want to try it? 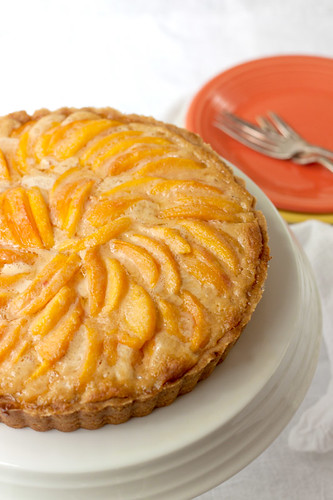 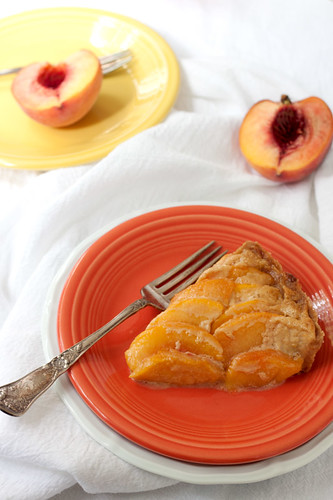 After I discovered I liked these fruits, I went on a search to find as many recipes as possible that use them, which is how I came to make this tart. It is so good, I think it kind of puts the strawberry tart I made last year to shame. When the peaches caramelize, their juices soak into the dulce de leche filling and it all tastes so good together. It’s a messy dessert, but it’s the kind where you want to lick your plate at the end to get every last bit of it.

If you don’t know what dulce de leche is, it’s a delicious form of caramel and it’s a perfect accompaniment to peaches. You may be able to find some at the grocery store, but it’s also quite easy to make. I made it few times and tried a few methods, but I recommend this method from David Lebovitz because it was really easy and took the least time. The only change I would suggest is to add a couple of cinnamon sticks to the sweetened condensed milk while it cooks because that adds more flavor to the dulce de leche. It especially works well with this tart since there is cinnamon in the crust. This recipe only uses about 1/4 cup of dulce de leche, but don’t worry, you’ll find ways to use it up…if you don’t wind up eating it all with a spoon first! I’ve been using it in my coffee, it’s like a creamer and sweetener in one. 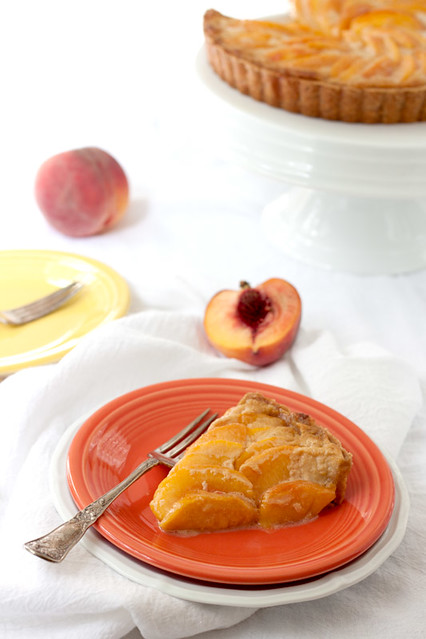 Serve warm or at room temperature.