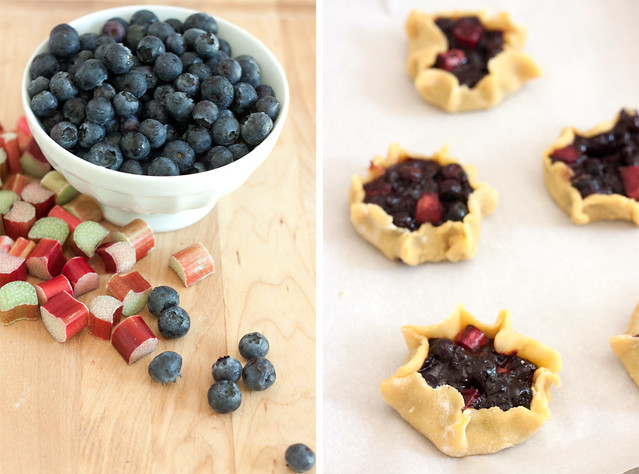 The only problem was that my rhubarb wasn’t as blindingly red as hers looked, so I decided to change the filling and add some blueberries to it to give it a deeper color. I’ve tried rhubarb with cherries, strawberries and now blueberries and I have to say that blueberry-rhubarb combo is my favorite of the three. I cooked the blueberries and rhubarb with some orange zest and dark muscovado sugar which has a strong flavor similar to molasses. The resulting compote was so good I could hardly stop myself from eating it all before I even got the tarts made. Luckily, I made more compote than I had tarts to fill so I saved the rest and have been eating it on my oatmeal and yogurt and I even made another fool with it mixed in. And of course, I’ve been eating it in these wonderful tarts.

What I love about the recipe is the use of corn flour and cornmeal to create a crust that has a totally different taste from all the other tarts or pies I’ve ever had. But despite the different kind of flour the texture is spot on. It’s buttery and tender but still strong enough to hold the compote and it has that melt-in-your-mouth quality that the best crusts have. One of my favorite things is sweet cornbread and this crust has a very similar taste. The sweet corn flavor also compliments the rhubarb-blueberry combo well. But I think it would taste equally as good if you used strawberries or cherries or any other berry you like. 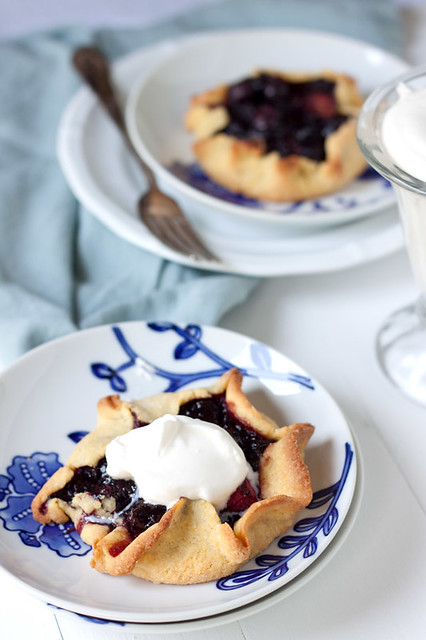 I also love the rustic look of these tarts. I think they’re just as pretty as the tarts I’ve made in my tart pans, but they’re so much easier to make. You don’t need special pans or even a rolling pin, it’s all made by hand. Just press the dough in to a circle, spoon some of the compote in the middle and fold up the sides. So simple!

This recipe is also very flexible. You need about 3 hours but most of that is waiting for things to cook or freeze, so you can go do other stuff. If you don’t have the time for that, you can divide it up by making the compote a day or two ahead of time or you can even form the tarts and freeze them for up to two weeks before you cook them. I don’t know about you, but I’d love to be able to pull one of these out my freezer and bake it for an easy dessert one night. 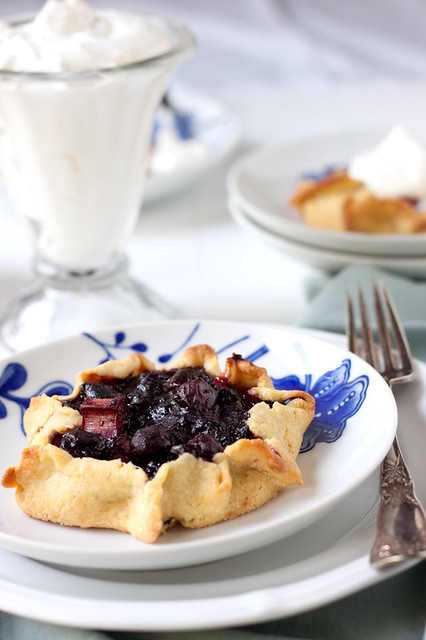 adapted from Good to the Grain by Kim Boyce

Eat warm or at room temperature. You can heat them up in the microwave for 30 seconds. Great with a dollop of fresh whipped cream or a scoop of ice cream.

Store wrapped tightly in plastic or in a sealed container for up to 3 days.