The King Cakes I’ve made in the past have always been huge, not only hard to handle and store but they’d wind up drying out before we could finish eating them. So this time, rather than making one giant cake I decided to make small personal-size cakes. I don’t think I’ll ever go back to full size again! This recipe makes four 6-inch King Cakes which are adorable and easy to carry and store. I think they’d make great Mardi Gras gifts for friends or coworkers! 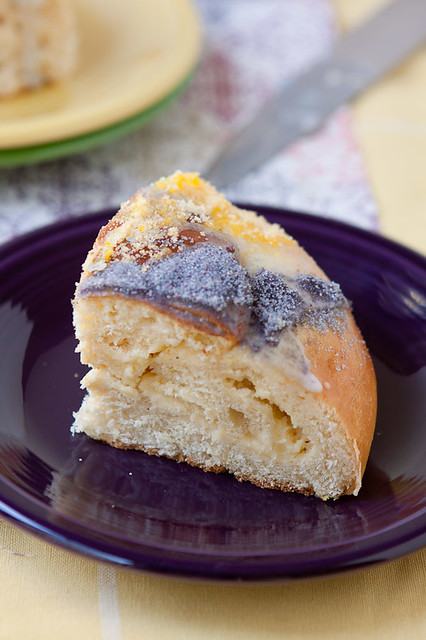 I posted a King Cake recipe 3 years ago (that post has more info on the history of Mardi Gras and King Cakes if you’re interested) but I wanted to try a filled version this time. I said in that post that I didn’t like filled King Cakes which is still true. This isn’t really what I’d call a “traditional” filled cake but I like it much better. The traditional ones I remember had a big ol’ gelatinous glob of cream cheese and/or fruit pie filling in the middle and it was never very appetizing to me. For my version of a filled King Cake, I spread a layer of a cream cheese mixture (basically cheesecake) on top of the dough and then on top of that I spread a layer of sweet lemon curd (if you’ve never had it before, it’s sort of like lemon jelly). Then I rolled the dough up jellyroll-style to make a delicious lemony-cream cheese swirl in the cake. 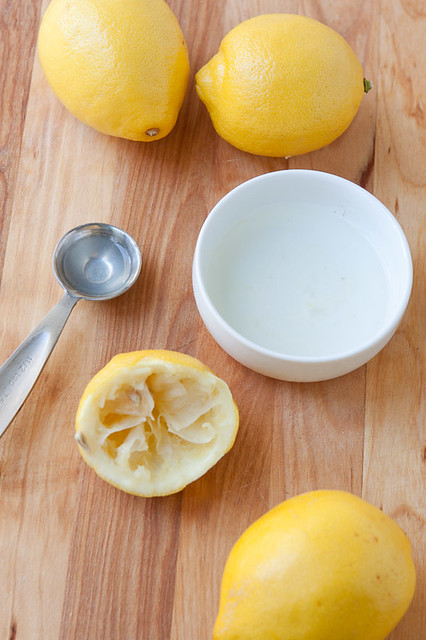 I’ve been obsessed with citrus lately so this King Cake has lots of lemon. Beside the lemon curd, it also has lemon zest mixed in and it’s topped with a lemon glaze. King Cakes have a texture more like a bread than a cake so all the extra flour balances out the lemon flavor making it more subtle. It gives each bite a nice pop of freshness rather than being overly tart.

There’s really no need to limit this cake to Mardi Gras. If you remove the multi-colored sugar topping you have a lightly-sweetened cinnamon bun-like coffee cake that can be eaten for breakfast or brunch. I realize the long list of ingredients and directions may look intimidating, but I promise it’s not hard! Most of the steps only take minutes and it’s all basic stuff that anyone can do (or that your mixer does for you). And you won’t need to get up at the crack of dawn since the recipe can be made a day or two before serving. In fact, the King Cake tastes best if you let it sit overnight so I recommend making it ahead of time. Just hold off on glazing it until right before serving; it will look and taste better that way. In all, there’s less than an hour of hands-on time and if you have a dough hook for your mixer, you don’t even have to knead anything. 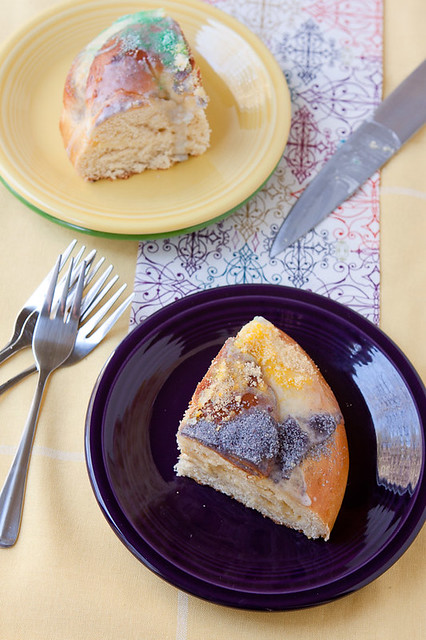 As I was making this recipe I realized there are a lot of egg yolks in here. Not only in the cake, but in the fillings as well. Don’t throw the egg whites away! You can freeze them to use later. In the next week or two, I’ll have a new recipe that uses up those egg whites but in the meantime you might want to check out this Frozen Raspberry Pie or this Chocolate Angel Food Cake. Both recipes are very worthy (and healthier) ways to use up those extra whites. 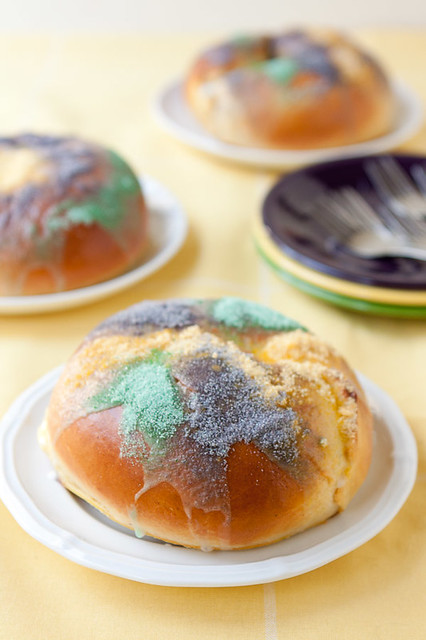 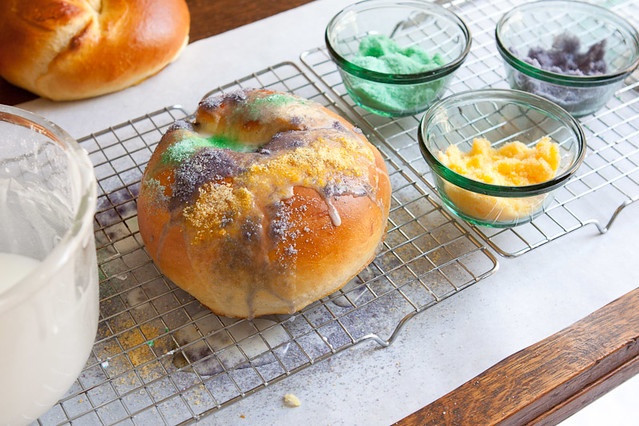 Serve at room temperature along with milk or coffee. Store in tightly wrapped plastic or foil. These cakes should be fine in a cool spot in your kitchen for about day, but for any longer place them in the fridge or freezer. Best within 2-3 days.