Sometimes I worry that people think I’m way better at this while cooking/baking thing than I actually am. But if anyone is to blame for this perception, it’s obviously me because I’m always telling you how easy this or that recipe is to make and blah blah blah…look how great it turned out, too! Here’s what you should be taking away from any recipe I post on this site: If I can make this thing, then you most definitely can as well. Because the truth is I’m still learning and I make mistakes ALL the time. But the awesome thing about learning to cook is that the more you do it, the more you learn little tricks and shortcuts so that you can fix your mistakes and learn to steer clear of them next time. But even then, things don’t always go your way. 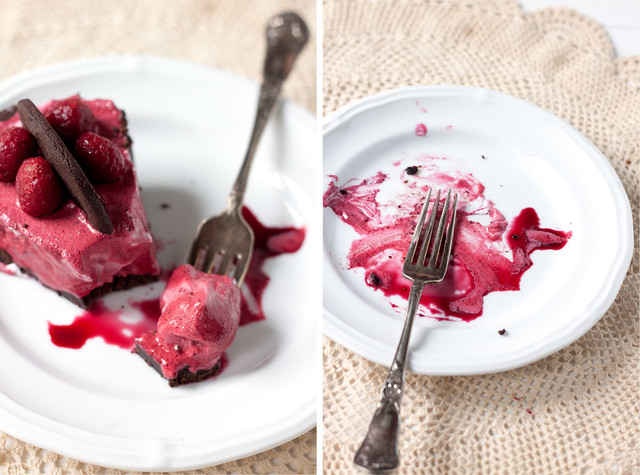 I cannot tell you how glad I am that this raspberry pie is delicious because if it hadn’t been I probably would have thrown the damn thing out of window. First of all, I should say that this recipe is NOT complicated in the slightest, but I just kept doing stupid things every step of the way. This pie has three main components: a chocolate cookie crust and raspberry puree that is mixed into a meringue. When it’s frozen, the texture is a like a super light and airy ice cream.

The recipe says to use crushed chocolate cookies like oreos for the crust, but my inner overachiever decided that instead of buying cookies, I would make them from scratch! Sigh. You know where this is going, right? I put them in my food processor with the other ingredients to make the crust and instead of the sandy/crumbly texture you’re supposed to get, I got a big wet ball of dough. But I persevered and kept adding more flour and cocoa until it wasn’t sticky and then I pressed in into the pie pan and baked it. In the end it actually tasted really good, basically like a giant chocolate cookie. This would be great for a normal pie, but since this a frozen pie it resulted in a “crust” that was almost impossible to cut. So anyway, just take my advice and buy the cookies. 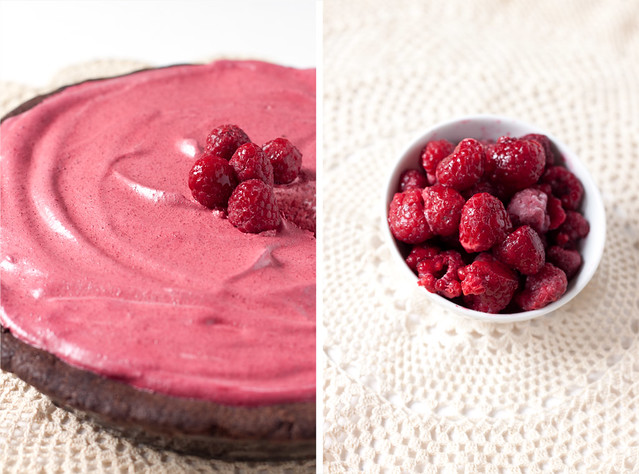 My next problem came from the raspberries. I had bought black raspberries from my CSA just for this pie and when I took them out of the fridge I noticed mold growing inside some of them. I was so pissed! I wish I had read this article when I got them. In end, I couldn’t bare to throw them all out so I just picked out the bad ones and washed the rest in hot water. What’s a little mold? And luckily, I had enough frozen red raspberries to supplement what I lost.

After I had gotten over the crust and raspberry hurdles, I only had one step left: the meringue. My first attempt was a complete failure. It’s entirely possible that I just suck at making meringues but I’m going to go out on a limb and say that the recipe is at least partially at fault here. Because after doing a little research the recipe seemed to be making it way more complicated than it needed to be. 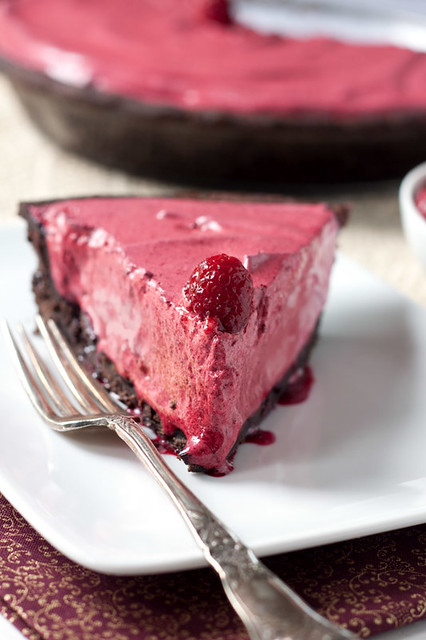 If you’ve never made a meringue before, it’s just eggs whites, sugar and a little cream of tartar all whipped together until big and fluffy. Since this is a frozen pie the filling is, obviously, not cooked. And many people don’t want to eat uncooked eggs. Me? I’m not one of these people. I eat cookie dough and cake or brownie batter all the time and have been for so long that I wouldn’t be surprised if my first sentence was “Can I lick the bowl?” I’ve never gotten sick. And in fact, a little research on the internet — which is always right 😉 — shows that getting salmonella from eggs is pretty rare these days.

But anyway. I get that it’s irresponsible to put out a recipe where people could even hypothetically get food poisoning, so the recipe required that the egg whites get heated to 160 degrees. This required having to whip the egg whites over simmering water, which means I couldn’t use my faithful stand mixer. After 15 minutes and using two different (and inferior) hand held mixers my whites weren’t even close to 160 degrees but had basically been whipped into oblivion. That’s when I gave up and turned to google who pointed me to a much easier method to get the whites to the correct temperature before you whip them, so then I could let my real mixer do the rest of the work. Thankfully, my second try was success. I’ve adjusted the recipe to use this better method so you don’t have to waste any of your precious egg whites like I did.

In the end, the pie was totally worth it. I don’t even like raspberries that much by themselves, but chocolate and raspberries always taste fantastic together. The raspberry meringue is a little sweet and a little tart; freezing it gives the filling structure, but then it melts perfectly once you take a bite. And it’s a relatively guiltless dessert since it’s mostly egg whites and fruit. I bet it would be great with strawberries or cherries or different kinds of cookies in the crust, too. There’s lots of possibilities for this simple summer pie! 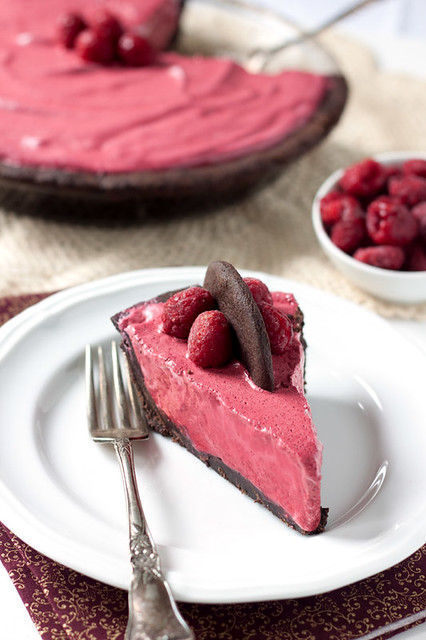 Cover in plastic and store in the freezer for up to two weeks.

* Black raspberries will give you much deeper color if you can find them.

** Superfine sugar is NOT the same as powdered sugar. I’ve also seen it called Castor sugar and Baker’s sugar. I have a bag that I got from King Arthur Flour. However, you don’t have to special order it, just put white granulated sugar in a blender/food processor and process for about 30 seconds until the sugar is fine.