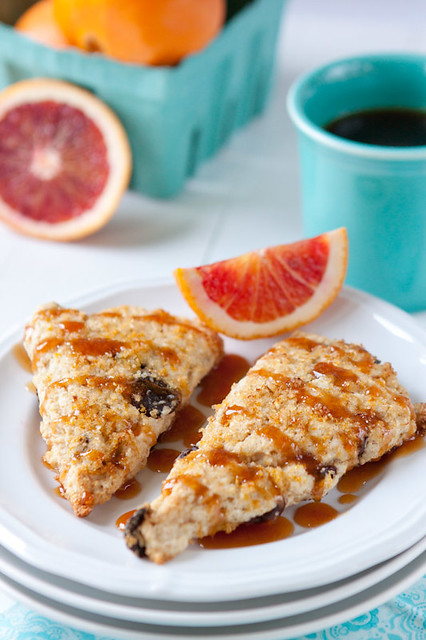 As I said last fall, cream scones are the only way to go. All the scones I’ve tried to make without cream were dry and dense and almost inedible. After some searching I think I have finally found the ultimate cream scone recipe. I say ultimate, because they are literally all cream scones. There’s no butter, there’s no eggs, there’s just lots of sweet, sweet whipping cream and these scones are all the better for it. Heck, there’s hardly any sugar in the recipe, if it weren’t for all the cream it could practically be health food. I thought the lack of sugar and butter were going to result in dry scones but these are soft and fluffy and light. I even substituted some whole wheat flour for the white flour but other than the scones being a bit flatter than they were supposed to be the texture wasn’t really affected.

I adapted to recipe to make use of my oranges by mixing in some of the zest and also making some more orange sugar to sprinkle on top. I also mixed in a bag of one of my favorite snacks, dried tart cherries, which compliments the orange flavor perfectly. This recipe is ridiculously easy—the less you handle the dough, the better these are going to be—and has very few ingredients so you could easily adapt it to use your favorite citrus and dried fruit mix-ins. I’m already planning a blueberry-lemon version. You could even replace all the citrus zest with a spice. Apple-cinnamon maybe? 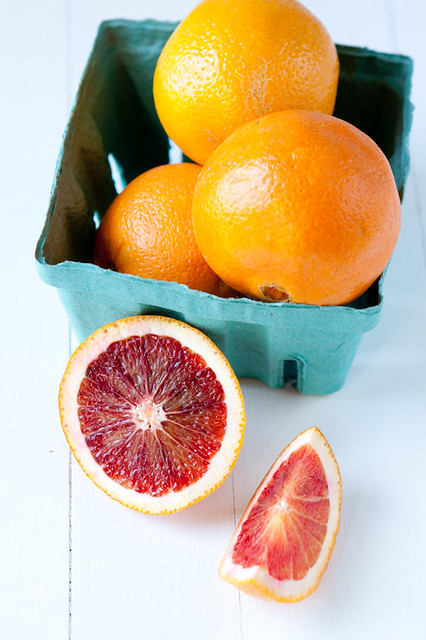 I really wanted to showcase those blood oranges so when I found this blood orange caramel sauce recipe I knew it would be a perfect way to finish these scones. I know it may seem like sugar overload to put a caramel sauce on top of something that is sprinkled with sugar but the scones only have 1/4 cup of sugar in them, so they are just barely sweet by themselves. As long as you drizzle the caramel on lightly it’s not overpowering at all. It’s sweet but the juice from the blood orange adds a wonderful tartness to it. It was hard to drizzle it on the scones and not just eat it by the spoonful! These scones still taste great with only the orange sugar on top so feel free to omit the caramel sauce but it’s a real treat if you want to make the effort for it.

The way I know I finally found the perfect scone recipe is that my boyfriend loves them. This is a big deal because he hates scones. He’ll usually eat anything you put in front of him and doesn’t complain but we’ve actually had discussions about his hatred of scones because of how dry they are. When he grabbed one this afternoon I told him he’d hate it but he ate it quietly and then 10 minutes later went back for another. According to him, these can’t be scones because they’re actually good. I guess that’s the power of whipping cream. 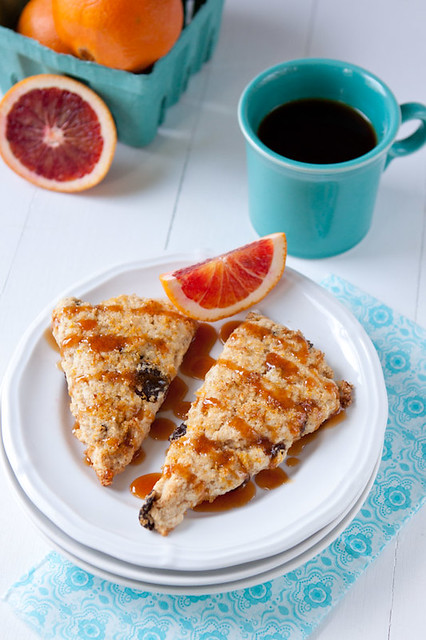 Using the wrong amount of flour can be the difference between light, fluffy scones and dense, hard ones so make sure to measure your flour the right way: fluff it with a spoon and then lightly spoon it into your measuring cup, finally use a knife to level it off.

*I substituted 1 cup of all purpose flour with whole wheat pastry flour. I could tell the scones didn’t rise as much as they were supposed to but otherwise they were perfectly fine.

You can make these a day ahead. Let the scones cool completely and then wrap them in foil and store at room temperature until ready to serve.