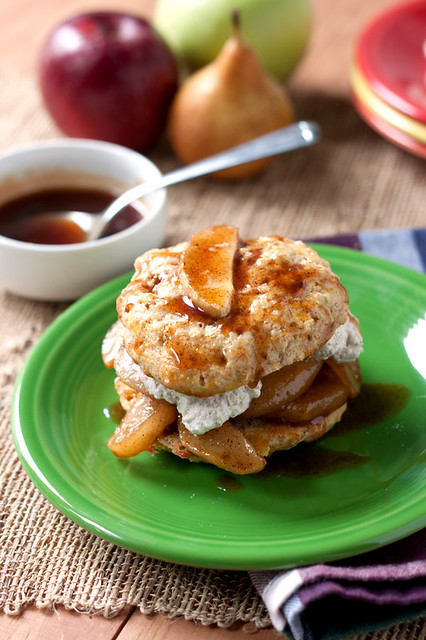 I’ve been learning to cook for several years now and I finally feel like I’m getting a handle on adapting recipes and improvising to suit my needs, but since I never went to culinary school or anything like that some of the science behind making food still eludes me. Baking can be especially tricky since I’ve been trying to use more whole grain flours and they don’t have quite the same properties as white flour. Today’s recipe comes from what I originally thought of as a baking failure, but through some quick thinking I was able to turn it into something pretty awesome.


This started out as a recipe for apple scones because I needed to use up some of the apples I’ve been getting in my CSA box the past few weeks. I like scones but have always had trouble making them on my own. I can’t think of any scones I’ve made that didn’t turn out dry and crispy. Blech. That is until these apple scones. It turns out the secret to soft and moist scones is using cream. And here I’ve been trying to make low fat scones for years not knowing that you just shouldn’t bother. Seriously. Some things just aren’t meant to be low fat and that’s ok. I’d rather treat myself to a couple of absolutely delicious scones and give the rest away than have to eat a bunch of rock hard cardboard scones that are low fat.

Even though I made my peace with using cream and butter I decided to try to offset that stuff a little bit by replacing some of the white flour with oats and whole wheat flour. Unfortunately, I didn’t realize that this would keep the scones from rising at all. I was all set to be angry and declare them a failure until I tasted one. It was the best scone I’ve ever tasted. Despite its flatness it was soft and moist and slightly sweet with just enough apple pie spice in it. Just perfect. I had been worried that the grated apple and oats would wind up making the scones kind of chunky but both ingredients basically disintegrated in the oven so the crumb turned out very smooth and fluffy. 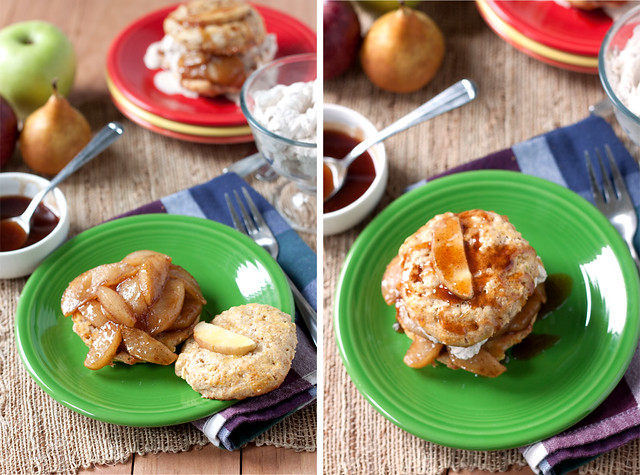 I looked at my flat apple scones and realized that they looked like halves of a whole scone and that I just needed to put something in the middle. That’s when I got the idea for a fall version of strawberry shortcakes with apples and pears instead. The scones hold together great and can support the weight of a filling, but are soft enough that a fork can cut right through all the layers. I made the filling by simmering apples and pears together with brown sugar and spices until they were soft and syrupy. Then I whipped up some cinnamon whipped cream to put on top of the fruit. Finally after covering everything with another scone I drizzled on some of the leftover spiced syrup from the fruit filling. 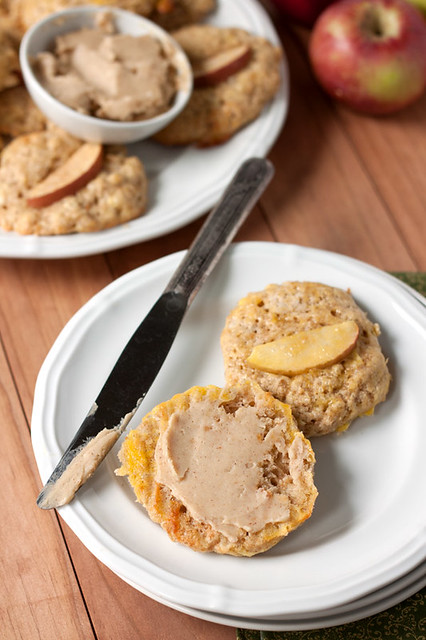 The best part of this recipe is that you can get so many different meals out of it. Besides making shortcakes you can eat most of the components by themselves. The apple scones are great on their own for breakfast. They’re even better slathered with spiced maple butter. I’ve had honey butter before, but I think I like maple butter even better. I can’t wait to try it on some waffles or pancakes! 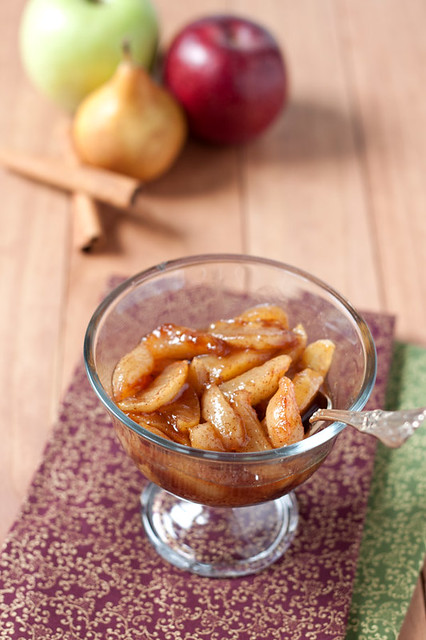 The spiced apples and pears double as a side dish with dinner or as a dessert that you can top with ice cream or the cinnamon whipped cream. Either way, your kitchen will smell wonderful afterward.

In the end, I think this has to be my favorite fall dessert I’ve ever made and I hadn’t even planned on making it. I can only hope that my future baking mistakes will turn out as well as this one did. 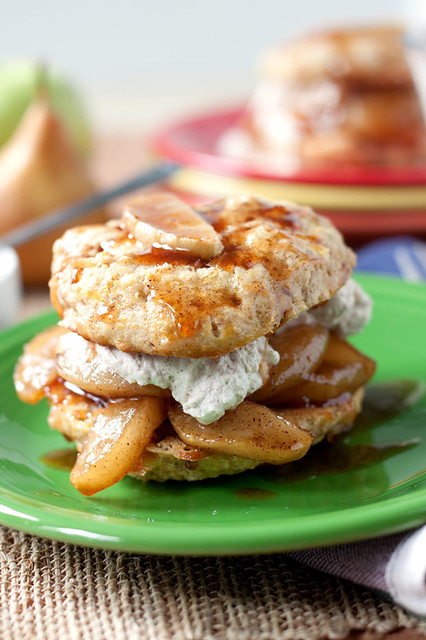 *The fruit mixture can be served warm or at room temperature. However, if it’s warm the whipped cream will start to melt, this doesn’t affect the taste but it will affect the presentation. The sauce from the fruit mixture is easier to drizzle when it’s warm so if you want to serve the fruit at room temp, the easiest way would be to use a slotted spoon to transfer the fruit to bowl to cool. Leave some sauce in the pan so that you can warm it up when it’s time to drizzle it on top of the shortcakes. 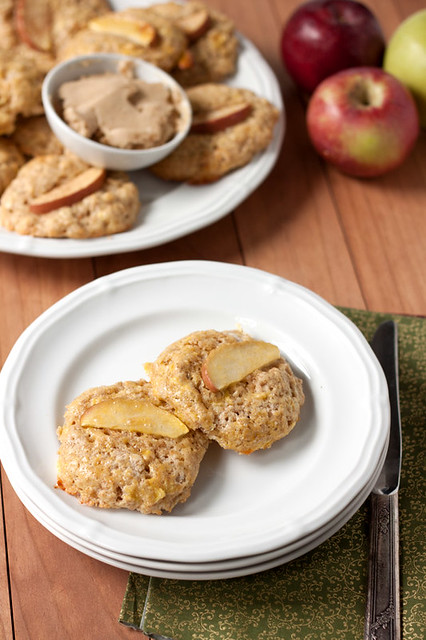 *The original recipe uses AP flour so use that instead of the whole wheat if you want yours to rise a bit more.

***I used the largest size hole on my cheese grater. You could cut the apples up very finely if you want, but I found grating to be much easier and faster.

***If you’re looking to cut calories you can sub half and half for the heavy cream, but the texture of the scones won’t be quite as light/soft. 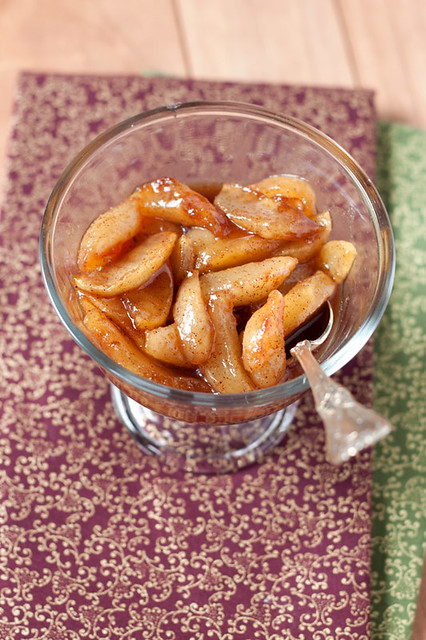 Serve as a side dish with dinner or top with ice cream or cinnamon whipped cream for dessert. Store in an airtight container in the fridge for up to 3 days. Reheat over low heat.