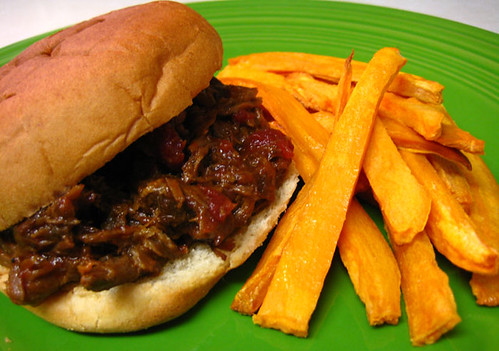 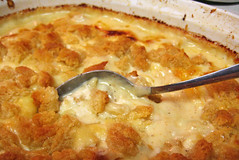 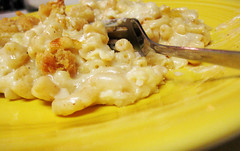 I also had to make some Macaroni and Cheese over the weekend. It’s probably my favorite dish and I’m always looking for new mac n’ cheese recipes. I had high hopes for this one as it’s from the Martha Stewart Living Cookbook: The Original Classics via Smitten Kitchen, but to be honest it wasn’t my favorite. It wasn’t bad, though. I think it was the type of cheese. $10 is a lot to pay for a fairly small hunk of cheese and the taste was a bit too sour for me. It probably means I have a very unsophisticated palette, but my go-to recipe using Velveeta and cheddar still reigns supreme for me. 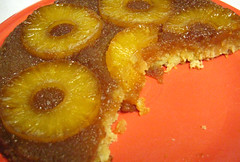 And I couldn’t forget dessert! My boyfriend had mentioned wanting pineapple upside down cake a few weeks ago, so I thought this was the perfect time to make it. It’s okay to indulge if it’s a holiday, right? I found a recipe for it on Simply Recipes and it turned out to be delicious. I was a bit worried because it called for ground up almonds and I’m not a almond fan (or nuts of any kind really), but since they was ground up, the cake did not taste like almonds at all.

I’m a big fan of cake batter. Honestly, there are cakes that I make just because I like the batter and I only eat a piece or two of the cake and throw the rest away. But yeah, the batter for this cake was heavenly and the actual baked cake tasted just as good, which in my experience rarely happens.

I actually messed up on the size of the pan I was supposed to cook it in. I only had 9″ rounds and not a 10″ round like it called for, plus they were more shallow than it was supposed to be. So I had enough batter left over (even after eating quite a bit) to make two whole cakes, and one of those almost overflowed the pan while baking. I’m going to try to find the right size pan for the next time I make this.

Did you think that was it? No, I still made more this weekend. And if the cake and macaroni and the beef weren’t enough, this dish should just be called Heart Attack on a Plate. I made it for breakfast yesterday and Oh. My. God. 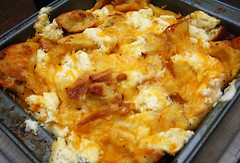 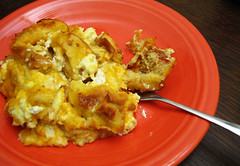 Brandon’s verdict was that it tasted a lot better than it looked. It was yummy, but yeah, not for the faint of heart (literally). The recipe is from The Pioneer Woman. It’s basically egg casserole. I didn’t have the onion rolls it called for, so I substituted everything bagels and that worked just as well (I think you can use any kind of bread, really). Besides the eggs and bagels, it has milk, cheese, cream cheese and lots of butter. I used low fat cream cheese, skim milk and margarine (it that better for you than butter?), so that may have cut down on the heart attack factor a bit, but not by much. I’ll definitely make it again, but will probably limit it to once a month (or less).

After all that, I had a salad for dinner last night and I’m planning a very simple boneless, skinless chicken dinner tonight. In fact, I’ll probably be cooking low-fat dishes all week to try to balance out everything I ate this weekend, but it was totally worth it.