I really wasn’t expecting this soup to be so good, I was just trying to use up the two weeks worth of yellow tomatoes from my CSA and this recipe fit the bill. I wound up changing the original recipe quite a bit, though. That’s what I love about soup, you can almost always add your own spin to it without risking messing it up completely. For instance, if you can’t get your hands on yellow tomatoes, I’m sure regular tomatoes would work just fine.

My main change was to roast the tomatoes. Roasted vegetables are my favorite side dish, I can’t think of any vegetable that isn’t improved by oven roasting so the thought of concentrating all those flavors into a soup practically had me salivating. I roasted the tomatoes along with a yellow bell pepper, onion, garlic and a red jalapeno. The original recipe calls for canned chipotle chilies, which are just red jalapenos that have been smoked so all I had to do was add a little liquid smoke to get the same flavor. 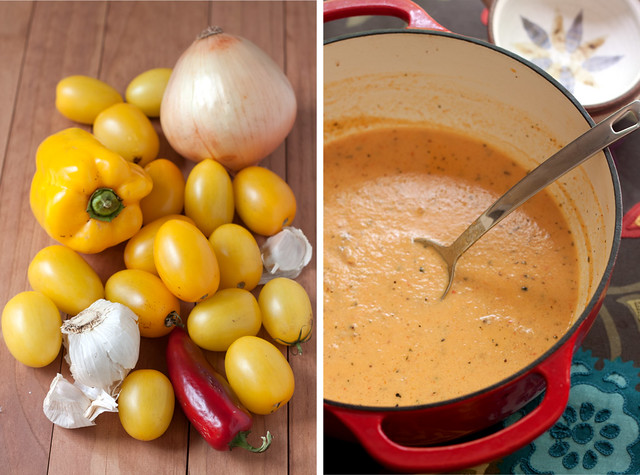 I have to warn you: this soup is really spicy. But I’m a total wimp when it comes to spicy stuff and I loved it. The heat is what takes this soup above and beyond any tomato soup I’ve ever had and I think it would be pretty boring without it. But if you’re worried, I used the whole jalapeno including the seeds; you can remove the seeds for a less spicy soup.

How have I gotten this far and not mentioned the bacon?! Oh yes, lots of delicious bacon. And this soup is really easy to make. The roasted vegetables are pureed (a lot or a little depending on how chunky you like your soup) and then added to the pot with the bacon, some broth and a little wine. After the ingredients have simmered for a little while and all the flavors have come together heavy cream is stirred in to give the soup that perfect creamy texture. This tomato soup is not for the faint of heart, but it’s worth every spoonful. And spicy foods make you burn more calories, right? It practically makes up for itself in the end. (Ok, not really, but it’s so good you won’t care.)

Update: I got orange tomatoes in my CSA box this week and my first thought was to make more of this soup. I used a mix of large orange tomatoes, cherry tomatoes and red peppers. It tastes just as good and it’s actually a much prettier color than the yellow tomato soup. So feel free to use whatever color tomatoes you want! 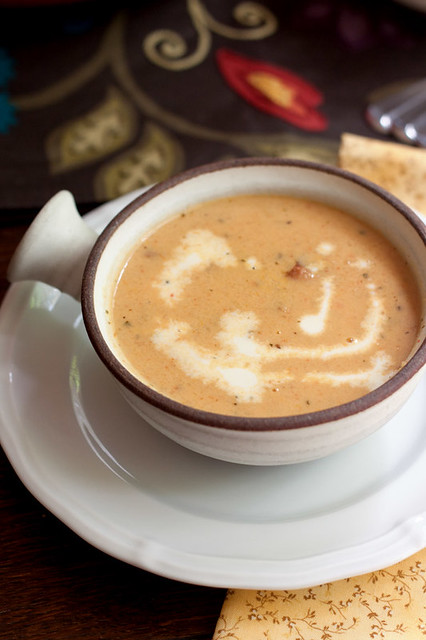 *You can substitute 1 to 2 tsp. (depending on how spicy you like things) of minced canned chipotle chilies in adobo sauce, but omit the liquid smoke. Add to the soup along with the oregano.

***To cut some calories, substitute half and half, low-fat evaporated milk or even low-fat sour cream. Or to make this soup even creamier, add 1/4 to 1/2 cup heavy cream.

To make this soup Paleo compliant, use full fat coconut milk instead of cream. You can also omit the sherry and liquid smoke.