Last week I got it in my head that I wanted to make a real pot pie and despite being almost 8pm I decided to go for it. I’d seen a bunch of pot pie recipes around on blogs I read, but all of them seemed too complicated or took too long (I didn’t have time for dough to chill) and none of them were my definition of chicken pot pie: an actual pie. You know, with a top and a bottom to it…

Well, Betty Crocker to the rescue. I don’t know what I would do without that cookbook. It’s my mom’s copy and it’s from 1969 and it has some really heinous dated recipes in there. But it also has ALL the basics; the kind of stuff that never goes out of style and this recipe is great example of that. 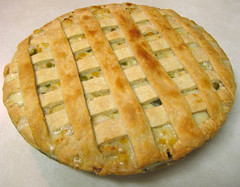 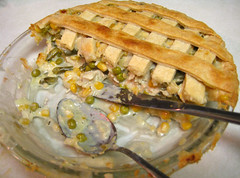 What really surprised me about this chicken dinner pie recipe is how simple it was. From reading over the instructions, I was expecting it to take a lot longer than it did. Even making the pie crust only took about 10 minutes. I went in expecting that to be a total bitch, but it really wasn’t. Then you just mix up the filling, pour it in and cook.

Another thing that stuck me was how great this would be for leftovers. In other words, this is the perfect dish for your Thanksgiving leftovers next week. Throw in turkey and whatever vegetables you want and you have a great dinner. Maybe you have an extra pie crust in the freezer to make it even faster to prepare. Since it’s just Brandon and me, there’s always tons of leftovers after Thanksgiving, so I’ll definitely be making this recipe with them. 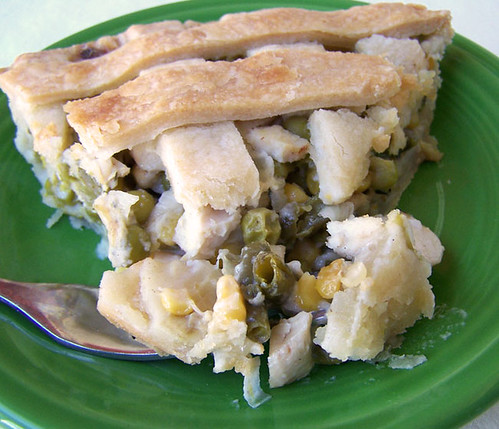 *For a shortcut, use pre-cooked chicken or turkey.

**I used canned just because that’s less stuff I have to cook, but frozen is fine as long as you cook according to package directions beforehand.