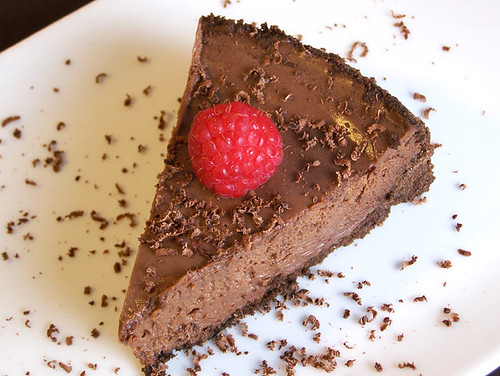 
As a point of comparison I decided to find out just how bad my favorite cheesecake recipe actually is. Oh. My. God. I plugged in all the ingredients into a recipe analyzer and it turns out that 1/12 of that cheesecake (in other words: a small piece) is 50 grams of fat and almost 800 calories! I try not to curse much on this blog, but OH SHIT. I LOVE that recipe, but it would have definitely undone all our progress, so that made me feel better about making a lighter version even if wouldn’t be as good. 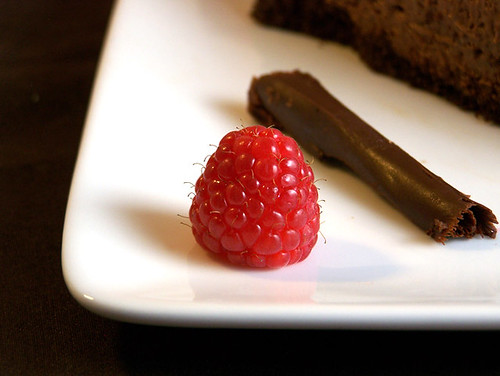 After much googling I found this recipe for Triple-Chocolate Cheesecake from Cooking Light. All the reviews of it were extremely positive (every single person rated it “outstanding”) and I figured the chocolate would help mask any of the ill-effects of having to use low-fat/no-fat ingredients. Now that I’ve made it I have to say that I agree 100% with the other reviewers. This cheesecake is fantastic. If I served it to you, there’s no way you would ever assume it’s supposed to be light. But it is. 1/12 is 10 grams of fat and 260 calories which compared to 50 grams of fat and 800 calories and especially for how good it tastes, is pretty amazing to me. It’s creamy and chocolaty, but it still has that sour tang from the cream cheese. It’s not as pronounced as the regular cheesecake recipe, but that’s to be expected. For me, the chocolate more than enough makes up for it. It’s also softer and less dense than the other recipe, but as long as you keep it chilled in the fridge it’s not a big deal. 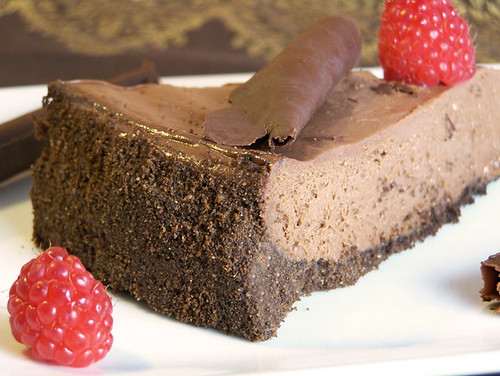 The only thing I had issues with was the crust. I actually really liked the taste of the chocolate graham crackers, but with only 1 tablespoon of butter and 1 tablespoon of egg white, they just didn’t stay together very well. I wound up adding about 2 more tablespoons of margarine to help it all stick together, but it was still very crumb-y. If you’re eating this at home with your family, it’s not going to be a big deal, but the crust is a little too messy for a party or nice event. Next time I may forgo trying to get the crust up the sides of the pan and just have it on the bottom. Plus, trying to get it to stay up the sides resulted in it being much thicker at the corners than the bottom. It really would have worked a lot better without sides. That or give up on the low fat aspect of it and just use 5-6 tablespoons of butter like you are supposed to. 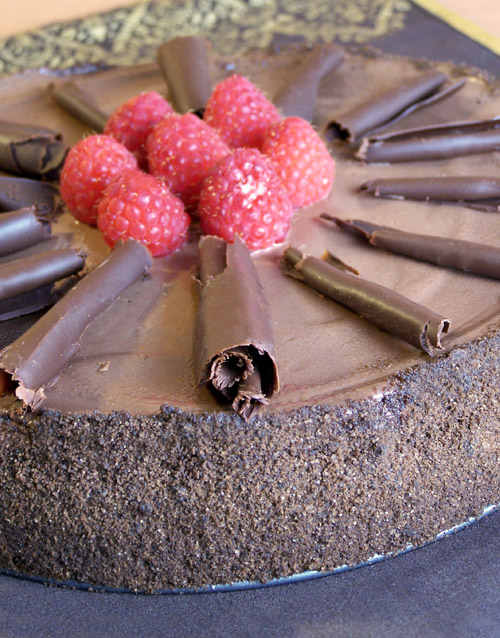