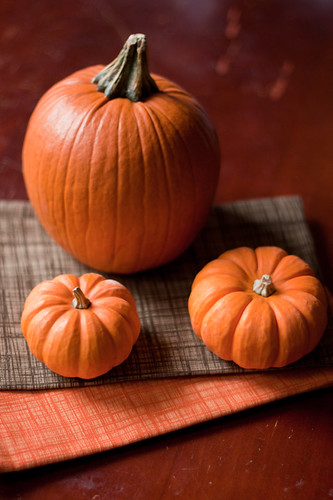 Whatever the excuse, I am so glad I made these because they are fantastic. Brandon, cynical person that he is, would like you to know that they are not exactly like a Twix because the ratio of cookie to caramel to chocolate is off, but BLAH BLAH BLAH (I am sticking out my tongue right now). No they aren’t exactly the same, but they have the same essence. That’s all I ask for in a homemade version of something, I don’t need an exact molecular copy. In fact, I love that there’s more caramel and a thicker cookie because I like those parts the best (and even if you don’t you can control how thick you want to make each layer). The shortbread cookie is crisp, the caramel is sweet and smooth and the chocolate tops everything off perfectly. It’s an awesome treat.

But I couldn’t be happy with just replicating a Twix bar. We’ve already established that pumpkin is on my mind. So as soon as I saw that the cookie part of the bar was just shortbread, the wheels started turning in my head and I thought: What if you replaced it with pumpkin shortbread? I know I like pumpkin and chocolate and I know I like pumpkin and caramel, so it only makes sense that I’m going to like pumpkin with chocolate and caramel! 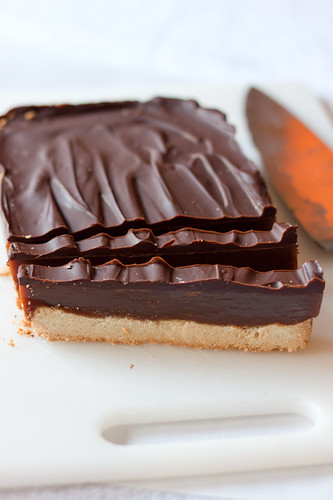 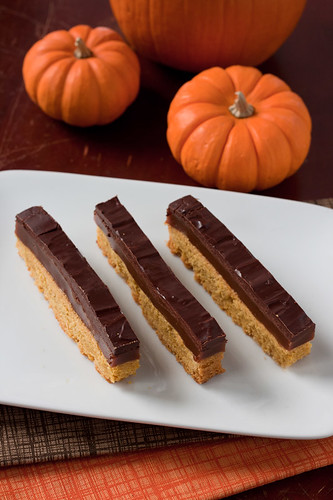 This recipe (well, recipes, but both versions are exactly the same except for the shortbread) seems like it might be complicated but it’s pretty simple to make. First, you bake the shortbread, then you make caramel and pour it over the shortbread and then you spread chocolate ganache on top. The part that takes the most time is the caramel, but don’t be scared off by it! I’ve made caramel before and I’ve messed it up plenty of times, but I didn’t have any problems making this. The only issue was my own impatience waiting for the temperature to rise because that’s the part that takes the longest time, but you don’t have to actually do anything but watch it, you’re not even allowed to stir! And once it finally gets to the right temperature you just have to whisk for a little bit and you’re done.

All-in-all, these are fun to make and I was very happy with the outcome. Now I’d love to try making more of my favorite candy at home! Along with Twix, my other favorites are Reese’s Peanut Butter Cups and Kit Kats. I buy those every year for Halloween, hoping we don’t have many trick-or-treaters, so I can have them all for myself. 🙂 What’s your favorite Halloween candy? 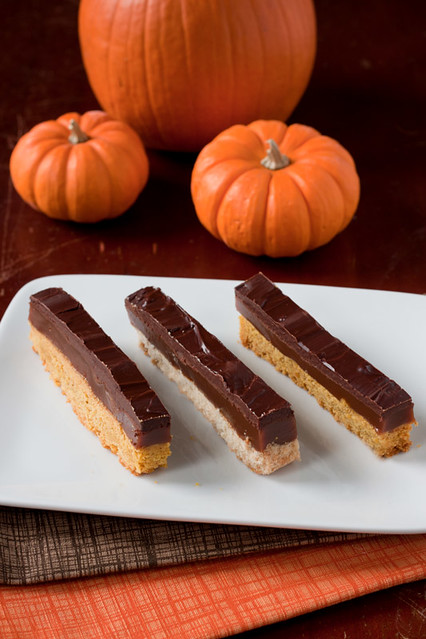 adapted from Desserts by the Yard by Sherry Yard

, via Not Without Salt

The only difference between the two versions is the shortbread recipe. I’m combining both recipes into one since they are similar, just pay attention when it says “original version” or “pumpkin version” depending on which you are making. The chocolate and caramel parts are exactly the same for both versions.

Store wrapped in foil or wax paper in a cool spot. Can be stored in the refrigerator, but let sit out for 15-20 minutes so the caramel will be easier to slice.