I’ve actually been working on this recipe for a while. I made some pumpkin swirl brownies last Halloween and even photographed them, but I kept deciding against posting them because they weren’t quite good enough. Something was missing. But then earlier this year I discovered Supernatural Brownies. These are hands down my favorite brownies. Ever. And I have tried lots and lots AND LOTS of brownie recipes. I’m not into cakey brownies (if I wanted cake, I’d make that instead!), I like fudgey brownies and these are moist and fudgey beyond belief. 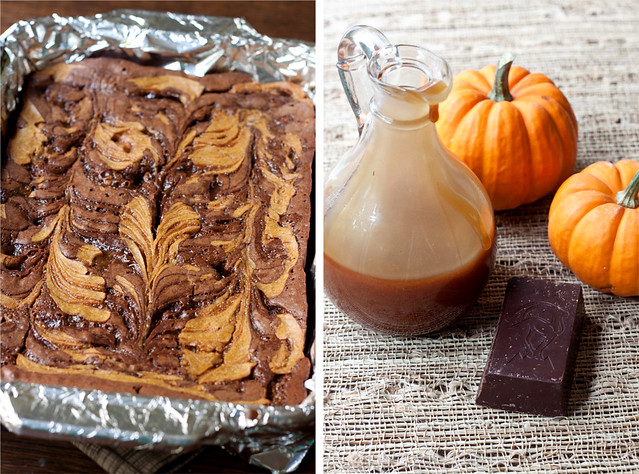 Fast forward to this month and I decided to retry the dessert but with the Supernatural brownies as the base. I also decided that chocolate and pumpkin weren’t quite enough. I’ve done that. I wanted to make it better. So what goes good with both chocolate and pumpkin? Caramel! The result are brownies with two layers of pumpkin-cream cheese swirled into them and then drizzled with caramel on top. When you’re ready to serve, you can warm up the rest of the caramel sauce and pour on even more. 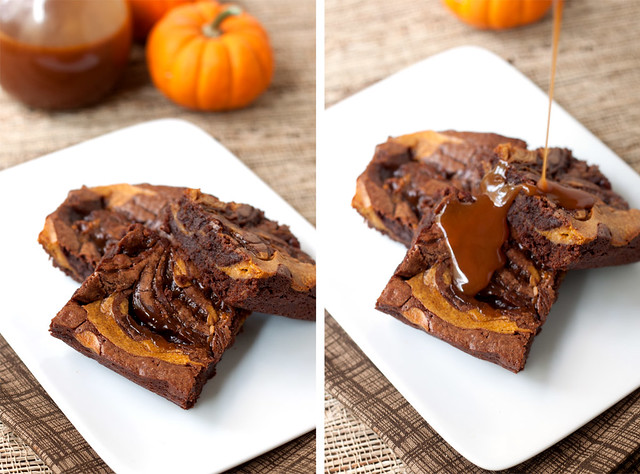 I have no qualms about posting this recipe. The perfect, fudgey brownies and caramel topping definitely fill what was missing from earlier incarnations I tried. I love everything about these brownies. Well, except that they take a little bit of patience. You’re supposed to wait until the next day before you even cut into these things. But honestly? I’ve only ever made it about 3 hours. However, I agree that the brownies taste better the next day. The flavors meld together and intensify. I felt that was definitely the case for the pumpkin, which was much more prominent on the second day than the first.

The ingredients you use are also important for making these brownies as good as possible. This recipe is very dependent on using good quality chocolate so buy the best kind you can afford. I splurged on some Scharffen Berger 70% Cacao chocolate this time, but I usually use Ghirardelli bittersweet chocolate. Also, use Muscovado sugar if you can find it. It’s a more intense dark brown sugar and will add more depth of flavor to your brownies. 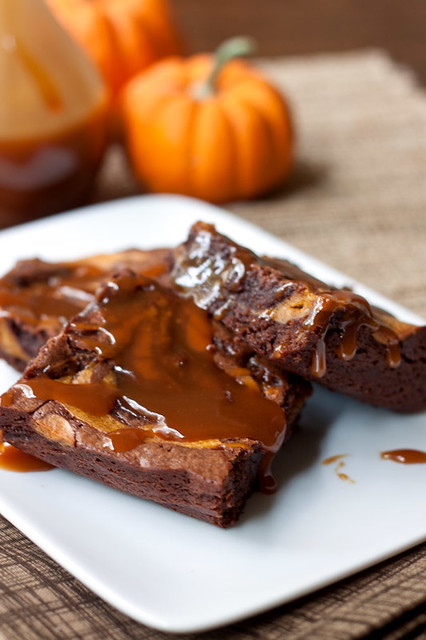 You can cheat and buy caramel sauce at the store, but homemade caramel is going to have much better flavor. I’m not going to tell you that caramel is easy. It only takes about 15 minutes to make, but you have to watch it very carefully. In fact, due to my old lopsided stove it took me four tries to make this caramel without burning it. Four! But honestly, that just makes it much more satisfying to eat. (And yes, it’s totally normal if you just want to eat it by the spoonful) Plus I learned some stuff about making caramel which I tried to pass on to you guys in the recipe so I think it was worth all the effort (and sugar) in the end.

This recipe is very versatile. Like I already mentioned, the brownies are great on their own. It’s my go-to recipe now. The other components are made separately, so you could just make the pumpkin OR caramel if you want to make things a bit easier. But if you really want to satisfy your brownie cravings, I don’t think the chocolate-pumpkin-caramel combo can be beat! 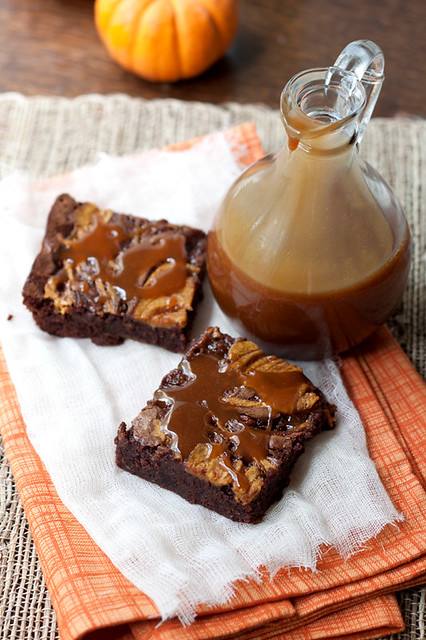 from Back to the Cutting Board,
Brownie recipe adapted from Chocolate: From Simple Cookies to Extravagant Showstoppers

Note: To make this recipe easier you can use store-bought caramel sauce or melt 14 oz. caramel candy with 1/3 cup heavy cream but I don’t recommend it because it won’t have the depth of flavor that homemade caramel has. (I also haven’t tested it that way, so I can’t vouch it will act the same way as this caramel sauce.)