I had a loaf of raisin bread sitting around and getting stale so I finally decided this was the day! And when I found a recipe for bread pudding that also had pumpkin (which regular readers know I am obsessed with right now) it was a no-brainer. That was the recipe I had to make.

Well–no surprise–that was a good choice because the recipe turned out as good as I had hoped. Since I’ve never had bread pudding before, I can’t say it’s the best bread pudding ever, but I can tell you that I liked it very much. It’s soft and warm and comforting. And such a pretty color! The flavors from the cinnamon-raisin bread, pumpkin and other spices go great together. And I liked that it was not overly sweet because I was kind of expecting something called a “pudding” to be too sweet. This would make just as good a breakfast as it would a dessert.

I think my only adjustment would be to add a bit more bread next time. Since I’ve never had bread pudding before, I can’t tell if the ratio of bread to liquid is off, but I thought some of it was a bit too eggy. That’s just a personal preference, but it is called bread pudding, so it doesn’t seem like you could go wrong adding more bread.

The recipe is really simple to make. Just mix all the ingredients together in one bowl and then bake. The only finicky thing is having to bake it in a water bath, but that’s not complicated. In the end, I wound up halving the recipe to make things even simpler and faster. The original made a A LOT, a whole 13×9 dish full, which meant needing a giant bowl to mix it up in and a pan bigger than 13×9 for the water bath. A 9 inch pan of this is still more than enough to feed a family, but if you have a lot of people to feed, you can easily double the recipe. 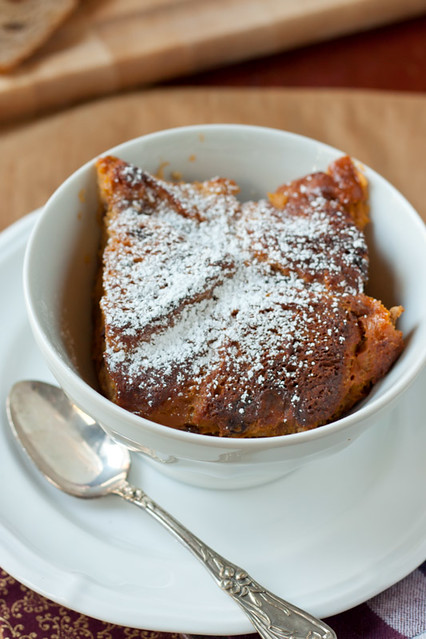 *Note: Obviously, you can buy a loaf of raisin bread at the store, but I would encourage you to make your own. It tastes so much better and is one of the easiest kinds of bread to make!

Serve warm or at room temperature, sprinkled with powdered sugar or a scoop of vanilla ice cream.

Store in the refrigerator. You can heat it back up in the oven for about 15-25 minutes at 350 degrees.