So I know the actual first day of Fall isn’t for a few weeks, but as far as I’m concerned Labor Day is the end of summer. After that it’s Fall. Even when it’s still 90 degrees outside. A year ago Brandon had just gotten a job here and we were preparing to make the move from Florida to Virginia. I cannot tell you how much happier I am in Virginia and the main reason for that is because of Fall (and Winter, Spring and even Summer). There are actual seasons here! Maybe I’m strange for being so affected by the weather, but I found the static-ness of Florida’s temperature and landscape to be utterly depressing (I probably would’ve felt differently if we had lived closer to the ocean, which I love, but unfortunately we were right in the middle of the state). Since I wasn’t here this time last year it’s nice to go out and see the beginnings of Fall; leaves are already starting to change color and fall off. In short, I’m really excited about Fall. Probably more excited than a normal person should be, but there ya go. I lived in Florida for more than 5 years, so there’s going to be at least couple of more years of me being totally enamored by this season.

Besides the beautiful weather, the other thing I love about Fall is the food. I am so ready for lots and lots of soups, stews and chili. And also the baking, lots and lots baking. I discovered the versatility of pumpkin last year, so I really want to take advantage of it this year. Unfortunately, I heard there is still a canned pumpkin shortage, so you should stock up while you can! But if you can’t find it canned, wait until they start selling fresh pumpkins and you can easily make your own pumpkin puree. I’ve included the directions at the bottom of this post, all you need is 15 minutes and a microwave!


Luckily, I still had a can left in my pantry from last year, so when I saw this recipe I decided to make it immediately. It’s a perfect Fall recipe! Plus, I love cinnamon buns, I love pumpkin and I love streusal. How could I not love these? 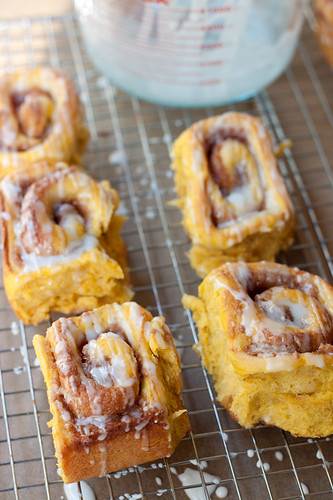 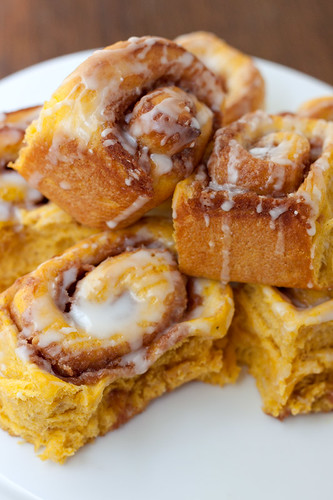 And I did, in fact, love these. They are moist and delicious, and even better, since the recipe is from Cooking Light, they aren’t terrible for you. I made a few changes, though. First, there was not nearly enough of the streusal filling so I added a bit more. The streusal is the best part, you can’t skimp on that even if it adds a few more calories. I also thought it could also use more pumpkin. These buns are a beautiful color, but the flavor wasn’t quite there, so next time I will add at least 1/4 cup more pumpkin (the recipe below reflects this change).

As with any kind of yeast breads, these take some time to make, but in the end it’s only about 2 hours from start to finish. Since you can be off doing something else the majority of that time, these aren’t difficult or time consuming at all. You can even prepare these buns the night before, refrigerate and then just pop the pan in the oven the next morning. What’s better than fresh, hot cinnamon buns on a crisp Fall morning? 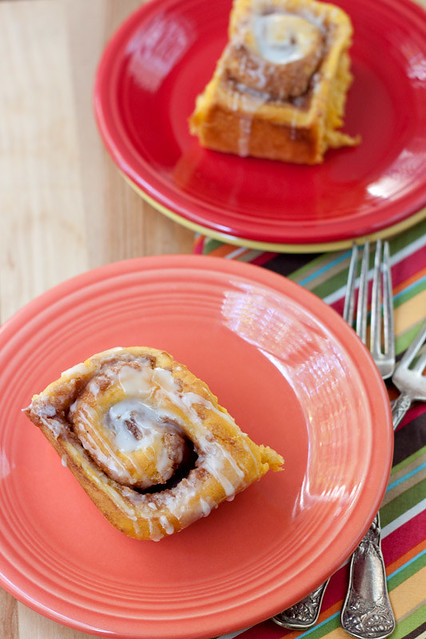 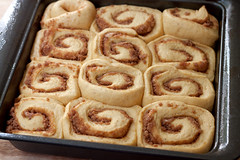 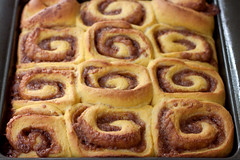 Serve warm. These are best eaten within 1-3 days (they get stale faster due to the lower fat content). Store in an air tight container.