So a couple of weeks ago, when I stumbled upon this recipe for dead simple donuts I just could not pass it up. I had to see if they were any good! I bought a can of pizza dough the next time I went to grocery store and tried it out the next day. I have never fried anything before, so I was scared to death I was going to burn the house down, but frying is surprisingly easy. And the donuts turned out to be pretty good, not Krispy Kreme good, but I thought they tasted almost exactly like funnel cake, which is a win in my book.


So cut to this week, when I had another craving for donuts and I figured I’d use the rest of the dough I had left. But apparently that dough doesn’t keep very well, because it was discolored and moldy looking, so that was out. But I still wanted donuts! So I decided I’d just make my own. After searching around for a recipe, most of which involved yeast (which I don’t have), I found one called Super Easy Donuts. That’s the kind of title that I’m all about. After making this recipe though, I’m rethinking the title. It actually took me two tries because the first batch was basically batter, it was in no way dough, and that was after following people’s instructions to lessen the amount of milk. So the second batch I lessened the milk even more and added an ass-ton of flour and finally got it into a dough-like substance that I could roll out. From there it was smooth sailing. And they turned out pretty good, too. 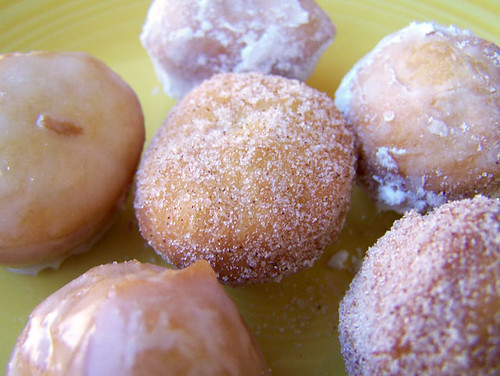 They are definitely more cakey than the pizza dough versions. I made full size donuts and donuts holes and I thought this recipe really lends itself to the holes as the cakey-ness isn’t so overpowering when it’s bite-sized. Many of the commenters on the original recipe had even suggested forgoing dealing with trying to roll out the dough and just dropping them in the hot oil by spoonfuls. That would probably make them less cakey, too, since you wouldn’t need to add all the extra flour to get them to roll out.

But one thing I did like about the cakey donuts is that they kept really well. The recipe says to serve immediately, but honestly, I liked the donuts SO much better the next day than I did when they were warm. I wrapped them up in foil overnight and when I tried one the next day it was really moist and soft and a lot less dense than it had been when it was warm. I also thought the bread dough tasted a lot sweeter. I don’t think the pizza dough version would taste anywhere near as good the next day, in fact they might be pretty gross: imagine day old funnel cake.

The pizza dough version is really good if you are looking for a something fast but if you want to go with homemade (who knows what kind of chemicals are in those canned doughs) this is a good, pretty simple recipe. I’ve made further modifications to it that should help with the dough problem, based on my experience making it and all the other commenters on the original recipe. One day I’ll have to try to make the yeast version, but the word “yeast” scares me too much right now.

I did have a lot of fun adding the toppings to the donuts. I tried cinnamon-sugar, powdered sugar, melted chocolate and lemon glaze (same as my lemon cakes), you can make regular glaze by using milk instead of lemon juice. 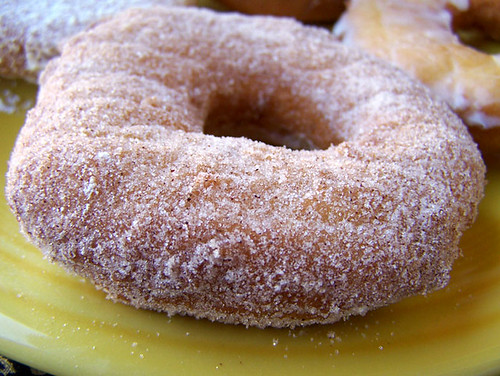