But first I thought I would give an update on the BBA Challenge since I haven’t posted about it in forever. I’m still plodding along with it, though most people are WAY ahead of me. For awhile I was keeping up with our fearless leader,Nicole but then I got behind since I haven’t had the time to bake in a few weeks. I’ll have to catch up next month.

For now I wanted to post about the three recent breads I made, which I’m calling The European Trifecta (because I think that sounds cool). They are: French Bread, Italian Bread and English Muffins. I’ll also mention the other previous breads, some of which I don’t have too much to say about, but I wanted to make sure to post about each of them anyway. 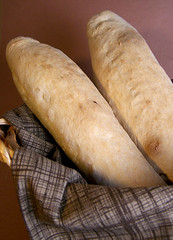 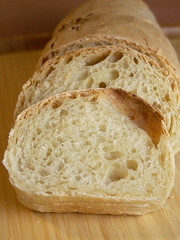 Most recently I made French Bread and Italian Bread. I was really worried about getting the French Bread right, but ultimately I didn’t find it terribly hard to make. It was the first time we’ve had to shape the dough into baguettes and since I always seem to have issues with shaping, I thought I would mess it up, but they turned out pretty good. You have to be very careful because you have to shape the loaves in a pretty specific manner (rolling back and forth to stretch them out) while still being very gentle so you don’t degas them too much. I thought my bread turned out to be fairly holey, so I think I did an ok job of that, though I know it’s definitely something I’m going to have to practice to get really good at.

It was also a return to hearth baking, which we haven’t done since Ciabatta and that whole process makes me really nervous. I’m always scared to death I’m going to burn myself or catch the house on fire. In fact, I was so nervous about making sure that my oven was set up right that I forgot to score the bread. See how mine is completely smooth? Well, it’s supposed to have marks in the crust. Oops. Despite that, I thought the bread turned out fine and tasted great. 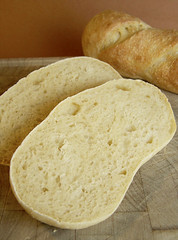 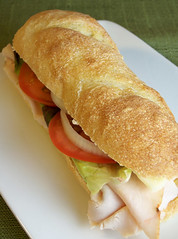 Italian Bread (pictured at the very top of this entry as well) is basically just sub bread. It’s more moist and has a tighter crumb than french bread, but honestly I didn’t think there was that much of a difference. It’s also made fairly similarly, hearth baking and all. I shaped it into smaller hoagie rolls instead of big loaves and it made for some really great sandwiches. And I actually remembered to score the bread that time, though I was so scared I was going to mess it up! I think I just need to buy one of those special scoring knives or a straight razor because none of my knives really worked. They caught on the bread a bit too much and pulled, whereas the knife is supposed to slice cleanly through. I did ok on some of the rolls, but other ones I didn’t cut enough and a few I cut too deep and they started deflating. So that’s another thing I will have to practice at. I think the key is making a confident slicing motion with your hand, if you go too slow or are too light it’s just not going to work. It almost felt like surgery at times! 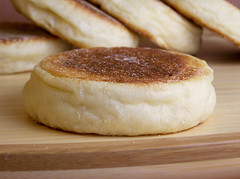 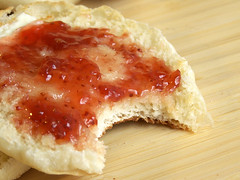 English Muffins were definitely the easiest of the bunch to make. I think they might have been one of the fastest breads we’ve made so far. I’m not entirely sure how this recipes compares to the kind you buy at the store, though. The big thing about english muffins is that they are supposed to have all those nooks and crannies and I made these twice and I didn’t really have much in the way of nooks or crannies either time. Though I fully admit that could be my fault. Either way, they tasted really good, so I didn’t mind. And the fun thing about english muffins is that you actually cook them on your stove top or on a griddle to get that nicely browned flat top and bottom. I will be making these again. 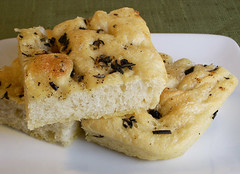 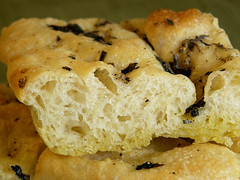 Also fun to make was Foccacia. It started out similarly to Ciabatta as it’s a very wet dough that needs to be stretched and folded multiple times. But then comes the fun part where you get to pour herb oil all over it. I made the oil by heating up olive oil and throwing in tons of chopped up fresh herbs and letting it steep. I pretty much used everything I had plus garlic and it was a bit of overkill. Next time I’ll limit it to 3 or 4 things because I think less is more with the herb oil. And I’ll pour on less oil, as well. The dough absorbs all the oil, but I thought it was a bit too oily in the end, though it tasted very, very good. Foccacia is really versatile and you can put pretty much any kind of topping on it, so I’ll definitely will be making this again and trying out different combinations of cheese and vegetables. 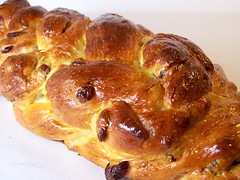 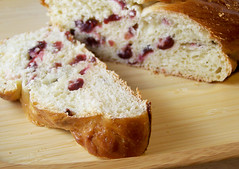 The Cranberry Celebration Bread was fine, but I’m not sure I’d make it again. It was supposed to have walnuts which I omitted, so maybe if I liked walnuts I’d like this bread more. It was fun to shape it into the double braid, though. But I totally screwed it up by placing the smaller braid off center of the larger braid, so as it rose it started leaning more and more to one side and it turned out extremely lopsided. Oh well! 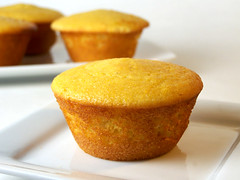 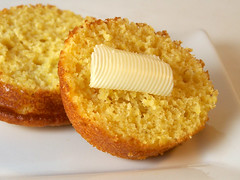 The cornbread was surprising because I was not expecting to like it at all and actually kept putting it off because I was so not looking forward to eating it. As I mentioned before, I’m not a fan of southern-style cornbread. I figured this was going to be same kind of cardboard and sand textured bread that I hate, but it turned out really moist and sweet enough to give it a nice taste, but not be overpowering like a dessert bread. Brandon declared it his favorite cornbread ever and I did like it better than my previous recipe mainly because while that recipe tastes good, it falls apart really easily. I made these into muffins instead of making a big dish and they stayed together nicely while still maintaining that melt-in-your-mouth-ness. I did omit the bacon topping mainly because I was weary about bacon in bread after the Casatiello which I did not like at all. I wound up accidentally omitting the corn because it was the last step and I just plain forgot. But I told that to Brandon and he said that sounded gross anyway, so I guess it’s good I forgot or he probably wouldn’t have eaten any. Sometimes I think he’s an even pickier eater than I am!

Despite the fact that I’ve slowed down in the challenge lately, I’m having fun making these breads and I’m still motivated to keep on going. I’ve finished 15 recipes already and am excited for more. I can’t wait for this move to be over so things can get back to normal again.