During the colder months I make soup at least once a week, but I’ve been making it less in the past few months. So last week when the temperature dropped and brought rain and snow with it, I knew I had to make some soup. I figure it’s my last chance before it gets too warm. I recently had some potato soup at Panera Bread and it made me remember how much I love it, so I decided to improvise my own version at home. I love spicy soup like my favorite Chicken Tortilla Soup and I love cheesy potato soup, so I figured I would combine those two into a single Tex-Mex inspired potato soup. 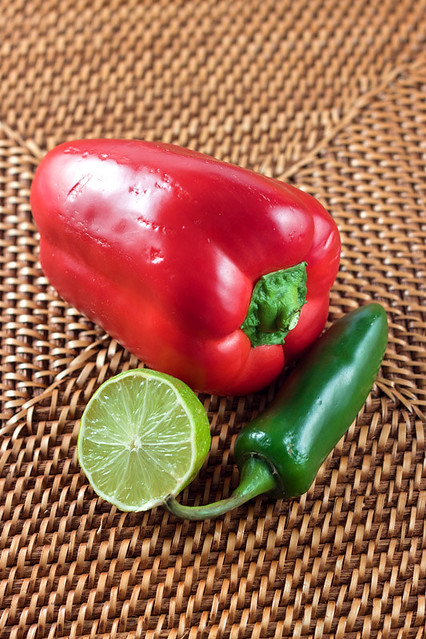 I looked up other potato soup recipes for reference and many were made with ingredients like cream and eggs. I wanted to keep things lighter since I knew I would be adding cheese and bacon, so I made a very thick base by blending up potatoes, carrots (you can’t taste them, but they make the soup a pretty color!) and chicken broth and then I used non-fat evaporated milk and melted 2% cheese to make it creamy. You would never be able to tell this is a “light” potato soup, though. It’s just as thick and creamy as any of the higher fat versions of it I’ve ever had.

The soup is filled with hearty vegetables like onions, garlic, carrots, bell pepper, jalapeno pepper and of course lots of potato. Add to that some bacon, cheese, cilantro and little lime juice for good measure. At first I was worried that all this stuff wouldn’t work well in a potato soup, but in the end I think this the best potato soup I’ve ever eaten! It’s thick and creamy, spicy and cheesy and so very satisfying. 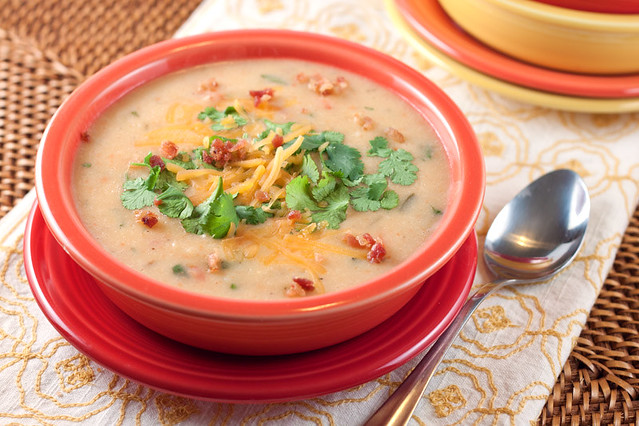 from Back to the Cutting Board, slightly adapted from Allrecipes.com

*Note: You can either cut up uncooked bacon and cook it with the onions/garlic/peppers or if you want to have extra for sprinkling on top, cook it separately (in a skillet or microwave), crumble it up and add it in with the ground pepper. I noted both instances in the recipe.

*Note: I found this soup to be more than thick enough, but if you like extra thick soup reserve 1/4 cup of the evaporated milk and whisk in the cornstarch until smooth. Add the cornstarch mixture to the pot along with the cheese. Stir regularly and cook until thickened.