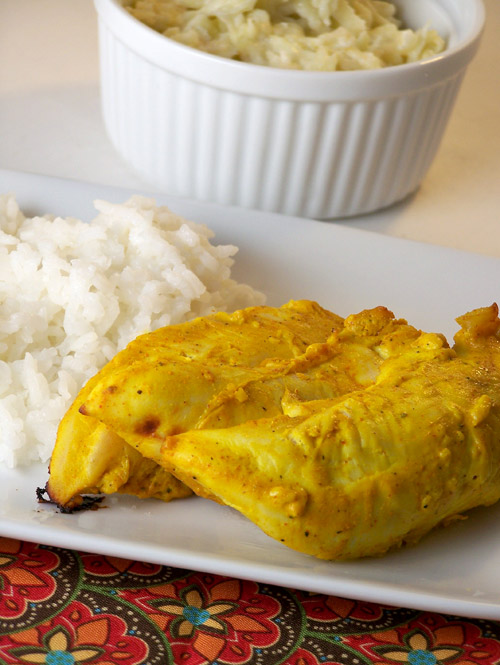 
The initial recipe says to use chicken breasts, but the second time I made these I only had tenderloins and I thought they were still really good (and even faster to make because the cooking time is only about 12 minutes). If you have picky kids that would look at yellow chicken in disgust, making tenderloins instead might make them a bit more palatable. 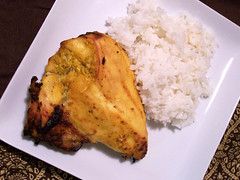 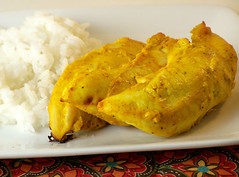 In the cookbook, this recipe is accompanied by a recipe for a yogurt sauce, which is supposed to be similar to “raita”, a traditional Indian sauce. But when I made it, neither my boyfriend or I thought it was anything like a sauce. It’s way more like a slaw. And I say that as a lifelong hater of any kind of slaw. Which is why both Brandon and I were really apprehensive about this at first. Basically, it’s grated apple mixed with yogurt. I mean, I like apples and I like yogurt. But I’ve never heard of grated apple in yogurt. It just seemed weird. But I have to say, it really surprised me. It’s one of my new favorite things. It’s just really simple and tasty and it’s a great, cool (and I mean that in every sense of the word) side dish if you are eating something, like this chicken, that’s a bit spicy (especially spices like ginger or cumin).

2. In a large bowl, stir together yogurt, garlic, tumeric, ginger, salt and pepper.

3. Add the chicken and coat with mixture.

Note: If you have the extra time, cut some slits into the chicken, cover the bowl or else put everything in a large plastic bag and let marinate for at least an hour or up to a whole day.

4. Place chicken on a baking sheet. For tenders, bake for 12-15 minutes (be careful about overcooking, they’ll get dried out). For breasts, 25-30 minutes or until the internal temperature is 160 degrees (F).

5. While chicken is baking, peel the apple and grate (larger/courser is better, so don’t use a microplane grater) into a bowl.

6. Add the lemon juice, yogurt and cilantro. Mix well. Keep chilled in fridge until the chicken is ready. If it gets too watery from sitting for too long, put in a strainer and drain some of the liquid out.

Serve with rice and the slaw on the side.