It was just unbelievably frustrating and there was no excuse for it other than laziness on our part. Now I’ve been making a meal plan for the upcoming week on Sunday and then I go to the grocery store and buy only the ingredients I need (so I’m saving some money as well since I’m not buying produce or anything that goes bad before we get a chance to eat it). I have it written out on a big white board in my kitchen, so the night before I’m reminded of what I’m making the next day and can take out any meat that needs to be thawed. It’s making my life so much easier. Even though I’m planning so much in advance it feels like I don’t actually have to think about food as much as I used to, which is a nice thing when you’re on a diet. (Almost 10 lbs. down in my first month, yay!) 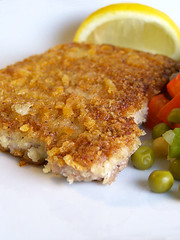 I plan at least a couple of new recipes to try every week, ones that might be time consuming, but I balance that out on other nights with recipes that are fast and easy and that I know will be really good. This meal is one of the latter and I’ve had a really hard time not scheduling it every single week because I like it so much and it’s just so easy to make. I’ve mentioned before that I’m always looking for pork recipes and this is my new favorite. The panko bread crumbs combined with asiago cheese makes the pork so crispy and tangy. I don’t think I’ve ever even had asiago before, but now I want it on everything. 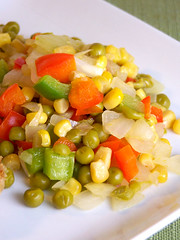 The sweet pea and pepper toss surprised me. First of all, a confession: I don’t I had ever eaten any kind of pepper before last year. At some point I had gotten it into my head that all peppers were hot and I don’t like really hot, spicy foods, so I just avoided them. But then I started this blog and found out that bell peppers aren’t hot at all. Sigh. I’m such an idiot sometimes. So anyway, I specifically chose this recipe because I’ve been trying to embrace foods I didn’t like (or never even tried) in the past. I didn’t even think peas and peppers sounded like they would taste good together, but the other thing that swayed me was that this whole thing takes about 10 minutes to make (prep and cook) and I’m all for easy sides. But it was really surprising to find out how much I liked this stuff. I wanted seconds. Hell, I wanted thirds. The sweetness of the peas and onions combined with the peppers just works really well together. I started throwing in some corn as well, just because I like corn and it adds some additional crunch. It’s pretty rare that I find a vegetable side dish that I love and the fact that it’s so simple only makes it better. 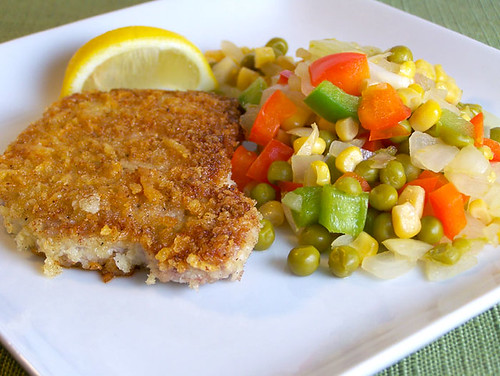 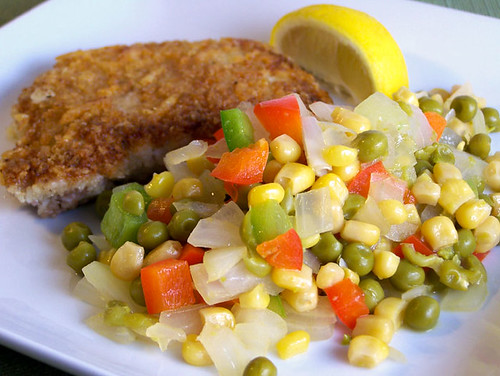