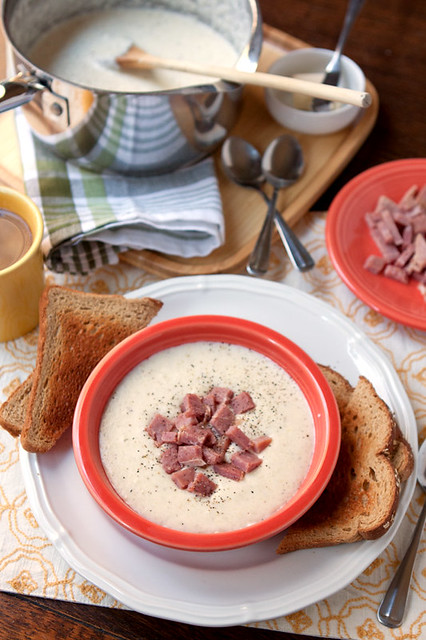 
It was definitely a satisfying Christmas, food and gift-wise, but I couldn’t help but feel a bit panicked on Monday morning when I realized I didn’t have any new recipes. And after cooking and baking so much over the weekend I was feeling too lazy to make much else, especially anything else with a ton of sugar. So I did what I always do (at least in the past few months) when I feel too lazy to cook: I made grits. And then as I was spooning them into my mouth, straight from the pot (why bother having to wash another bowl!) I realized this was the perfect thing to post this week.

Since I grew up in Mississippi and Tennessee grits were always a staple at our breakfast table, but I kind of forgot about them when I started cooking for myself. I was reminded of how much I like grits when I made Shrimp and Grits awhile back and I’ve been eating them regularly again ever since. Grits are wonderfully warm and comforting and they are dead easy to make. Perfect for after a major holiday when you don’t want to cook or anytime when you need a quick, easy breakfast or dinner. 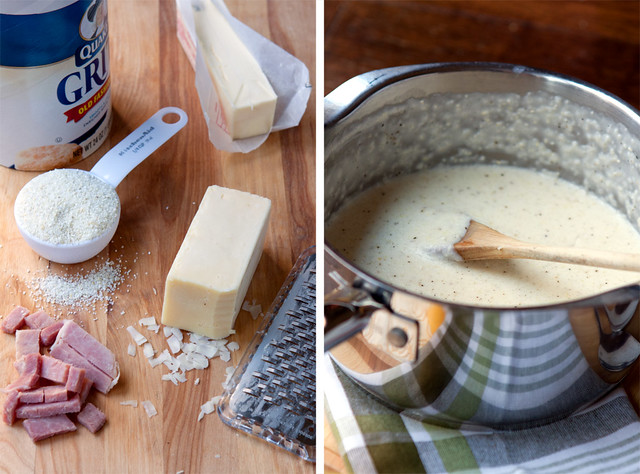 Grits don’t really have much of a taste on their own, they are basically a, well, grittier form of cornmeal. Most of the time I eat my grits plain with butter, salt and pepper. It’s simple, but it’s still delicious. But grits are also a great vehicle for different meats and cheeses and it’s fun to experiment with them when I’m feeling adventurous. We still had tons of ham leftover from Christmas so this turned out to be a great way to use some of it up. And you can’t wrong by adding cheese to anything.

If you follow the instructions on the back of the grits container, you’d think grits were made with all water. But anyone who does that is missing out! I always use half water and half milk in my grits. The milk makes them smoother and creamier and just plain better. And since it’s still December and I’m not in “diet mode” yet, I splurged and used half & half instead of my usual 1% milk to make these grits extra creamy and rich.

This is a really flexible recipe, obviously bacon or pancetta would work just as well as ham and you can substitute any number of cheeses. Or you can omit all that stuff and just make plain ol’ grits. Whatever version you settle on, it’s the perfect comfort food for a cold winter day. 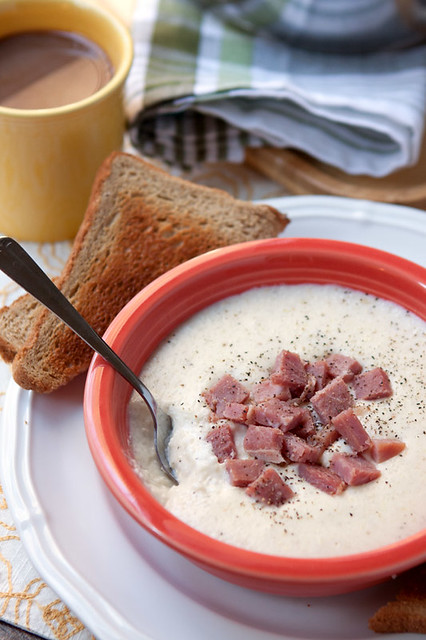 *To make a single serving, follow the amounts listed on the grits container but replace half of the water with half & half or milk.

**The ham can be cold or else saute it in a skillet for a few minutes to warm it up and brown the outside a bit.