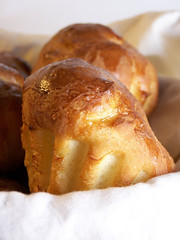 First up, Brioche. This is an uber-rich and buttery french bread. The book has three different versions of it, the main difference being the amount of butter each one has. I tried the Rich Man’s version first, which has two cups of butter in it. I kind of screwed them up, though. First of all they have this weird shape that is sort of like a cupcake or roll but with a little “head” sitting on top. I didn’t so great with the shaping and then when I was just about to put them in the oven I tripped and almost dropped the pan and they kind of deflated. Blah. So they were pretty sad looking, I didn’t even bother taking pictures. They still tasted good, but it was really too much. To me, they tasted like a cross between a croissant and doughnut. But if I’m going to eat something that is that bad for me, I’d choose a croissant or a doughnut before I’d make/eat this version of brioche again.

Since my first effort was a bust, I decided to try the Poor Man’s version which has the least butter, only 1/2 cup. These turned out better. My shaping still didn’t really work, the heads just sort blended in the with the rest of it making a cone shape, not a distinct ball like you’re supposed to have. Plus I cooked these a few minutes too long, so they were a bit dried out. Compared to the Rich Man’s version these were pretty bland, though they were good with jam. I think if I ever make brioche again, I’d do the Middle Class version which has 1 cup of butter. Rich Man’s was too much and I think Poor Man’s was too little, so maybe those would be perfect. I think this would be a really good kind of dough to make cinnamon rolls with–I saw a few other BBAers that did this–so I may try that some day, but otherwise I doubt I’ll be making brioche in this form again. I’m glad I did it, but there are breads I like much more (and feel less guilty about eating). 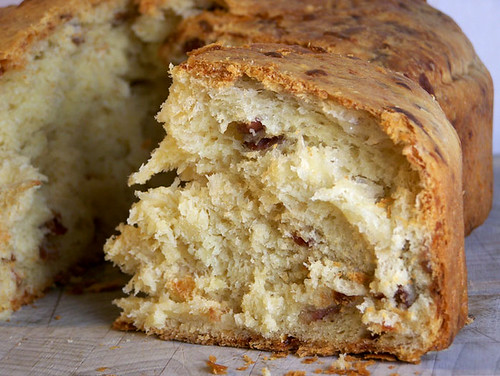 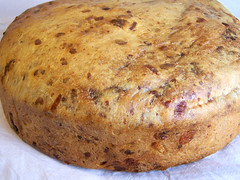 Next was Casatiello. I noticed a lot of people on twitter saying how great this bread was, so I was pretty disappointed with it after I made it. It’s a form of brioche, but with cheese and meat added. The provolone cheese I didn’t mind (though it’s not my favorite), but I guess I’m just not into meat in bread. The recipe called for salami, but I HATE salami, so I substituted bacon, which Reinhart noted is also good. But cheese and bacon in an already buttery bread? Ultimately, I just thought it was too much and the bacon really overpowered it. I wish I had just omitted the meat altogether and I think I would have liked this much more. My cats LOVED this bread, though. I accidentally left a piece sitting out and found them going nuts over it. I wound up feeding a lot of it to them and eventually just threw the rest away as I had no desire to finish it. It was a pretty looking bread, though, and was easy to make so I may attempt this again in the future without meat and maybe a different cheese like Cheddar or Swiss. 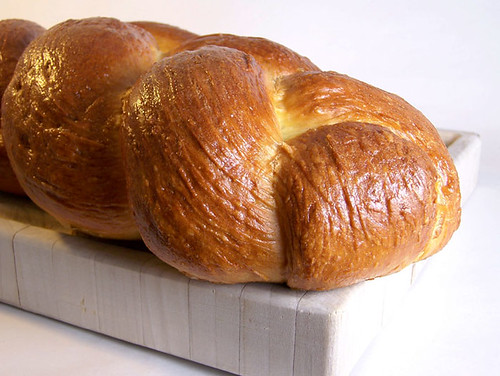 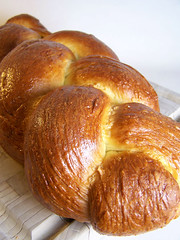 After my somewhat disappointing adventures with brioche, I wound up taking a week off from bread baking. Last week, I started back up with Challah and that was not disappointing at all. It was fun to make and I was really happy with how it turned out. I had a slightly hard time trying to pass the window pane test with this dough, but really didn’t have any other issues. I was apprehensive about the braiding since I always seem to have a hard time with shaping, but it wasn’t too bad! Reinhart says the shape should be big in the middle and taper down to the ends and I think I did that pretty well. This wasn’t my favorite bread ever, but it tasted fine, if a little boring. It might be fun to make as a gift since it’s such a pretty looking bread. There was another variation called Celebration Challah with a double braid which is a big braid with a smaller braid sitting on top so I’d love to attempt that some day, maybe after I’ve had a bit more practice with shaping dough. 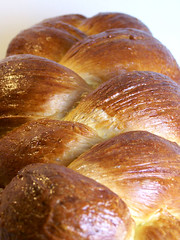 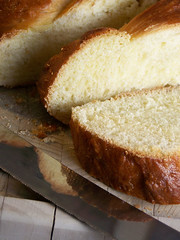 Like I mentioned, I finished Ciabatta earlier this week, but that’s going to be it’s own post. This weekend is cinnamon rolls which I am so excited about. I’ve been looking forward to those for quite awhile. Since I’m almost caught up with posting now, hopefully I can get on a better schedule of updating soon after I actually make these instead of waiting weeks. Also, stay tuned for some other stuff coming up this month. It’s my 1 year blog-iversary so I want to make something fun, plus I have quite a few recipes in the pipeline that I have yet to post.

Have a great 4th of July weekend (or if you’re not in the US, then have just have a great regular weekend)!